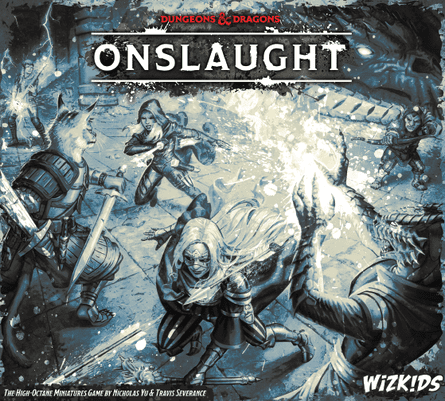 Take control of a faction in the Forgotten Realms and fight for glory.

So lemme preface this by saying I pre-ordered this thing when it was first announced and promptly forgot about it until FedEx delivered it yesterday. I'm not wild about having supported WOTC, but it is what it is.

I'll post again after I've had a chance to play it, but my first impression is that this is over engineered for max_profit. The box set is ~$125 retail but honestly it could have been priced waaaay lower if they added I'm fewer whiz-bang elements.

The minis: they come fully painted like a lot of the Wiz Kids D&D products and it's certainly a step up from grey plastic, but any kindergartten student could do a better job.

The gameplay: it's basic D&D combat but pared down and simplified. You still roll d20s to hit, but damage is a fixed value +- modifiers rather than being rolled. It reads quite a bit like 4e in terms of ability use with an added element of 'cooldown' for non-basic actions. They do spend a LOT of the rulebook going over cover and line of sight so that's really where a good chunk of the 'tactics' comes in.

Scenarios: they give a bunch of different setups using the basic map they include which involves PvP but also dealing with monstrous enemies for several scenarios so really a PvPvE situation. I imagine they will release more Scenarios in time.

Tracker dials: You know those spinner dials from Gloomhaven used to record life and exp? Take those and crank it to 11 with multiple attributes / cooldowns tracked but with the extra expense of every character / boss monster having their own dial. This is likely where a good chunk of the production cost came into play and it's largely superfluous. The same shit could have been tracked on a character card with a little token. As an added bonus they are flimsy and one of mine, for the black dragon, arrived with one of the dials already busted.

Again I'll reserve true judgement until after I play it, but I feel they could have done a lot better with a dedicated spin-off like this.
Show hidden low quality content
You must log in or register to reply here.
Share:
Share