#Gamergate and all things SJW

Debated putting this or other games or screenshots, but hopefully the discussion will be a little more productive here (only a little, I hope)

For those that don't know, Zoe Quinn is an "Feminist/SJW Indie Game Developer" - recently it's come out that's she's slept with at least 5 guys in the industry, including her married boss, and a reviewer at Kotaku/Rock Paper Shotgun. some of which may or may not have provided her with industry favours such a positive reviews, exposure for her game, and the opportunity to make paid talks at conferences.

Everywhere I go this shit is exploding, I'm shocked that we aren't picking it apart being the assholes that we are. Pretty shady stuff she's been pulling and the gaming media industry seems to be in full damage control mode.

Just for your viewing pleasure (because we've always loved this shit, and it's pretty juicy) The basic (long) story ishere

The best video as to why this is a bad thing is now below:


Various SJW are attacking/defending her, Reddit, 4chan, Kotaku, and the like are censoring talk about it, take down notices were issued for "copyright" on at least one youtube channel, twitters have been deleted, and the internet monkeys are jumping up and down and slinging shit all over the place.

Phil Fish jumped in to defend her (of Fez infamy) and now TotalBiscuit is under attack as well, for some fairly well-reasoned comments he has made.

Longest thread I've seen about it is in the escapist, where they are letting discussion continue if you behave yourself, but I'd rather see the rerolled shit slinging version.

and, the promise (disappointing and somewhat old) nudes:

Edit: Let's throw in a few more links shall we?

EDIT: No NSFW posts outside of Rickshaw or SS. - Soygen

I edited the pics out. You can put them back as links and note they are NSFW, but you cannot post NSFW content outside of Screenshots or Rickshaw.
Reactions: Shmoopy and bomermagic

Soygen_sl said:
I edited the pics out. You can put them back as links and note they are NSFW, but you cannot post NSFW content outside of Screenshots or Rickshaw.
Click to expand...

Done. I probably should have posted in screenshots from the beginning.
S

How did this flabby, unattractive, soggy clam become worthy of so much melodrama?

Some nerds need to get their shit together.
Reactions: Shmoopy, TrollfaceDeux, Poin Dexter and 1 other person

Woman uses sex in exchange for favors? News at 11.
Reactions: Shmoopy and TrollfaceDeux

She must be down for anything because her looks sure as shit ain't getting her in bed.
Reactions: TrollfaceDeux

Deathwing_sl said:
She must be down for anything because her looks sure as shit ain't getting her in bed.
Click to expand...

Chicks way uglier than this one have no issue getting laid. I think you underestimate just how many desperate dudes are out there.
Reactions: Shmoopy and TrollfaceDeux
V

Soygen_sl said:
Chicks way uglier than this one have no issue getting laid. I think you underestimate just how many desperate dudes are out there.
Click to expand...

Desperate neckbearded virgins you mean. She IS in the video game industry
Reactions: Shmoopy and TrollfaceDeux

That's multiplies the desperation by a factor of at least 5.

OP mentioned married dude(s?). That raises the opportunity cost more than somewhat. I mean, unless you married someone uglier than her.

Not Fat + Into Video Games makes her at least a 7 in the geek world.

Deathwing_sl said:
OP mentioned married dude(s?). That raises the opportunity cost more than somewhat. I mean, unless you married someone uglier than her.
Click to expand...

They haven't nicknamed her "Five guys" for nothing. But yeah, her boss, Joshua Boggs is married. The amount of guys she's probably slept with is turning out to be much higher. Nathan Grayson is the guy at Kotaku she slept with.
Reactions: Shmoopy

I bet she has tons of zelda shirts.
Reactions: Shmoopy

So... After reading the op... I have to ask what the fuss is? Why are people like total biscuit being hated on for this? Maybe it's because I've been out of high school for over a decade but this seems all juvenile. ITS A HUGE SCANDAL!!! Really?

Considering the 'sleeping for good reviews' is not backed by facts and that her sex life his her own business, I can't help but feel this is a manufactured witch hunt fulled by a lot of bored undersexed misogynists. A lot of good for gamer stereotypes that does!

Is the game any good though? I think it's some kind of serious game on depression?

Person sleeps with 5 people of the opposite sex within that person's industry.

The Escapist ran a story about Quinn's harassment in late 2013with little evidence other than her word. We will always default towards helping out people who are the subject of harassment on the internet. I do not support behavior of that kind and will strive to protect those who are feeling the effects of it. We will signal-boost those incidents because I think it's important to create change, and will only choose not to post such stories if I decide they will do more harm to the situation.

I continue to ask that you consider whether your actions in crafting a false narrative are helping anything. How will arguing about this situation on this forum make the world a better place? It just doesn't make sense to me why it's so important that this person is tried before a jury of the internet and found guilty of her alleged crimes. The parties directly involved have already resolved any personal issue they had, or I hope they are at least working towards it now. That is all that's important.

What you think is happening just isn't true. There is no conspiracy. There is no breach in ethics. There is nothing wrong except that a small group of posters on the internet think there is.

Contrary to your claims, harassment and abuse on the internet are very real things that cause actual harm to people. It's important for you to see how participating in crafting this story contributes to harmful actions and deeds. Please respect all people going forward."


Pretty good for a journalist. I especially like the way she shat all over the fine young capitalists game project. 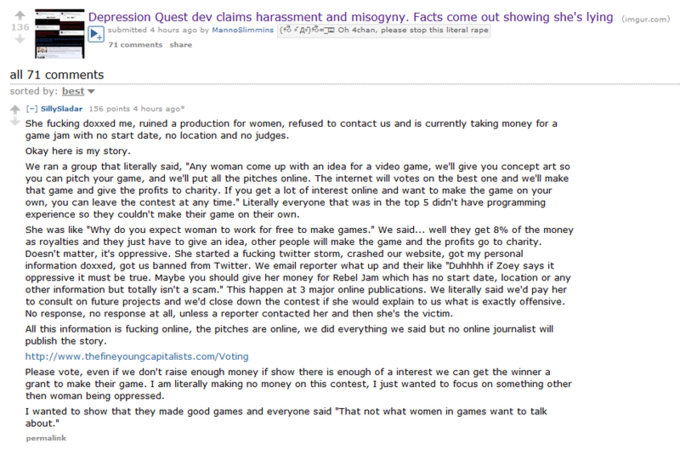 Wow I barely cared when /r/gaming was having a boner over this and after reading this I care even less.

People cheat on eachother all the time. People lie. People use their sexuality to gain favors.

This is the stupidest fucking bullshit manufactured ass drama I've ever read, I wasted time reading that.