Didn't get the attention there you expected eh?
Reactions: Flobee

No, what didn't happen is anyone shitcanning your stupid ass from this thread permanently. At least have the decency to only pop up every few hundred replies like wormie when it's obvious you don't have a fucking clue to offer anyone.

Like seriously, MAKE A FUCKING ARGUMENT. You have provided ZERO arguments in any of your replies, mostly posting decades old memes from movies about dumbasses (which you obviously identify with). The closest thing to an argument you have provided so far:

You're an idiot.
Reactions: Flobee

James said:
Like seriously, MAKE A FUCKING ARGUMENT. You have provided ZERO arguments in any of your replies, mostly posting decades old memes from movies about dumbasses (which you obviously identify with). The closest thing to an argument you have provided so far:

He’s just trolling you at this point, lol.

I know, but I'm going to keep responding anyway.
R

Why does it show Jame's has numerous posts back to back?I only see it in this thread. Is it a bug?

I'm currently in both of the Discords watching things play out, there still isn't anything to do with it really (incorporating mLoot is hard) but the development community is fascinating. Some of the things they're working on are: gas-free expansions, open map standard, and migrating to layer 2.

Also, FUCKING DOPE WARS, who here played that shit back in the day?

Rais said:
Why does it show Jame's has numerous posts back to back?I only see it in this thread. Is it a bug?
Click to expand...

Are you asking if it's a bug in his personality or the forum?

The answer is:. Yes

One of my uncles offered to show me how to stash accounts in the Cayman Islands and said it's the only way to not get completely fucked on taxes for crypto earnings.

Every time I've heard the words "Cayman Islands" in the past, it was usually connected to some rich shady fuck doing something illegal. So I'm apprehensive about getting a Cayman Islands account for crypto.

That said I also have a reckoning coming up next tax season because I've made a lot more than I've lost and I fully expect to get bent over by the Federales.

I could also just pay the capitol gains taxes like an adult, provided they're actually fair. Which in this state they aren't

Looks like the declaration of Solana’s demise were premature.

James said:
Where did I claim that I understood how taxes work?
Click to expand...

These OnChain Monkeys are doing pretty well right now. I think a lot of people are seeing the elegance of this solution to a really hard problem, and are starting to get that it's an extremely buildable concept with some serious VC backing it.

I dunno. Could be nothing.

So one of the things Loot is working on in the developer Discord is an open map standard, and they're talking about a lot of features and requirements it needs to have in order to be a buildable concept. They're debating whether the standard should support only procedurally generated maps, only custom maps, or both, and the technical upsides and downsides for each route. One of the big hurdles is how to encode the map data onto the blockchain given all of the data constraints, while at the same time trying to imagine how the next layer up would interact with it, e.g. how would events reference cells on the map (are they even called events, or triggers...?)

The problem OnChain Monkeys solves could work as definitions for those layer 2 events in Loot's currently envisioned open map standard, as these are easily deployable custom traits 100% on the blockchain. There's apparently a Twitter Spaces or some shit that happened tonight that I need to listen to, though. I think they have their own concepts in mind here.

EDIT: SS of some of the discussion, "dom" is the guy that created Vine (and Loot) btw: 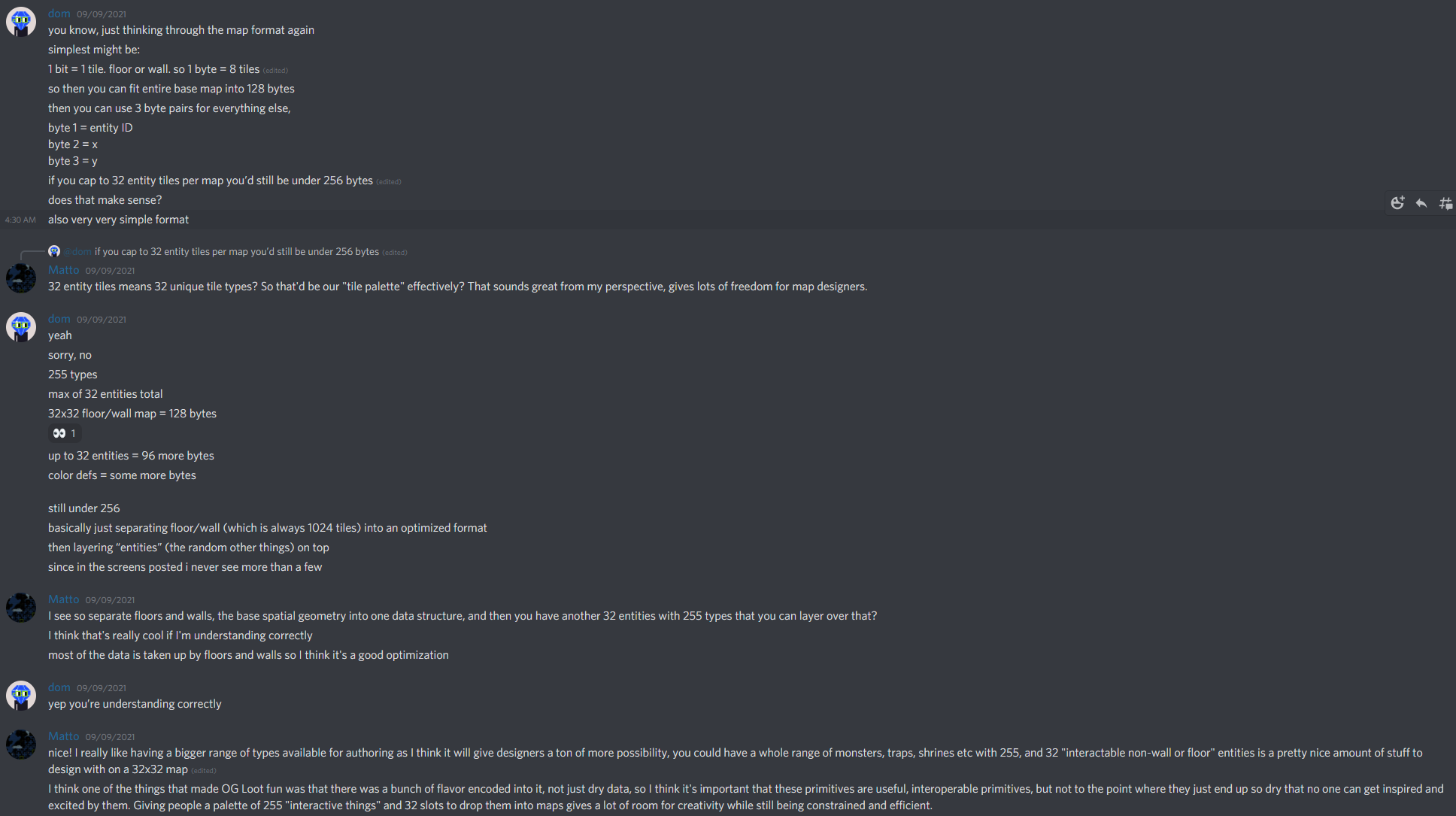 It may actually help to think about this from the smart contract perspective too: OnChainMonkey (OCMONK) Token Tracker | Etherscan

So for instance you can run the getAttributes(tokenId) function and get back an array with the attributes in a line. The value here is not the particular monkey on the SVG image on the blockchain, but rather the utility on the data itself that can be referenced by other smart contracts. It represents ownership of a series of map events for a particular dungeon, or whatever else, and, most importantly, any value created from the utilization of it. Long term, these are the building blocks of digital Dungeons and Dragons, and owning a particular position in that will always attract investors imo.

Still, I see OnChain Monkeys as more art than anything. This is just the first proof of concept, and the simple shape SVG monkeys that go with it are a neat way to envision it.

And the QUADRUPLE post to follow up from the Loot side where the OnChain Monkey concept fits perfectly: 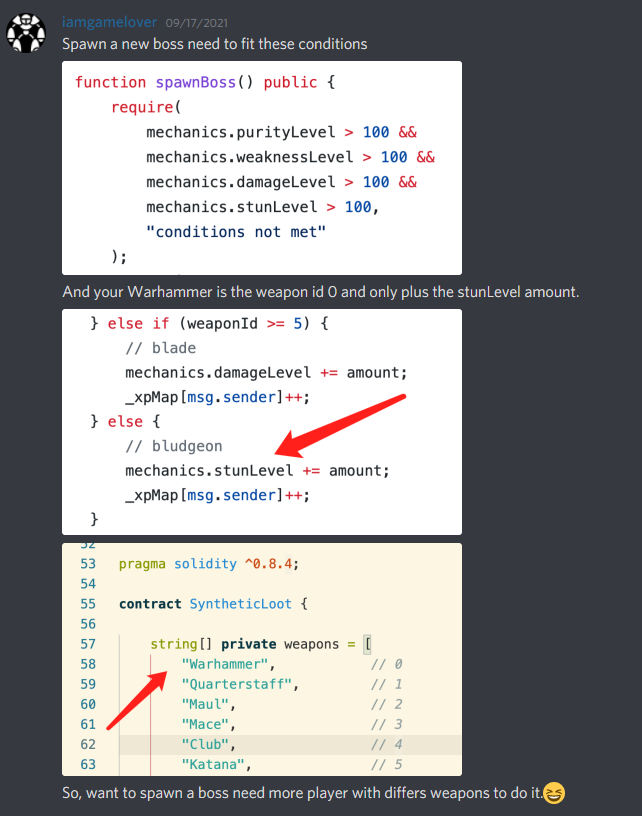 Mist said:
I actually just held it overnight the second time. I had sold all my ETHE shares on the 3rd because I didn't want to hold it going into the holiday weekend. My account was just sitting in cash for the next 10 days, and then yesterday when everything tanked, I noticed the afternoon price for Greyscale ETHE shares was hit harder from the volatility than the actual exchange price of ETH, creating a pretty large relative gap between the prices of ETH and ETHE, and assumed that the price of ETH would rise overnight and the market open price for ETHE would rise even faster to catch up as both prices regressed towards the mean after a bad day. It paid off.

I think there's a lot of money to be made looking at when the price of ETHE shares diverge too far from the underlying price of ETH during down days and playing arbitrage, basically.
Click to expand...

Spin the wheel of money one more time.

Spin the wheel of money one more time.
Click to expand...