I have a habit of going into Story Time! mode in various threads when I read something here that reminds me of a life experience. I know plenty of you do the same. I normally try to keep the stories short because they're somewhat off topic, but I thought it would be interesting to have a thread that anyone here can use to jot down some life experiences for no other reason than telling a (mostly true) story that you feel like telling. I'm obviously not a writer and I don't claim to be a wordsmith, but I like telling stories and really enjoy reading them from others that have a knack for it.

Please try to use this format to make scrolling easier:

Topic: Dad's car broke down in the Arizona Desert. I learned to cuss. 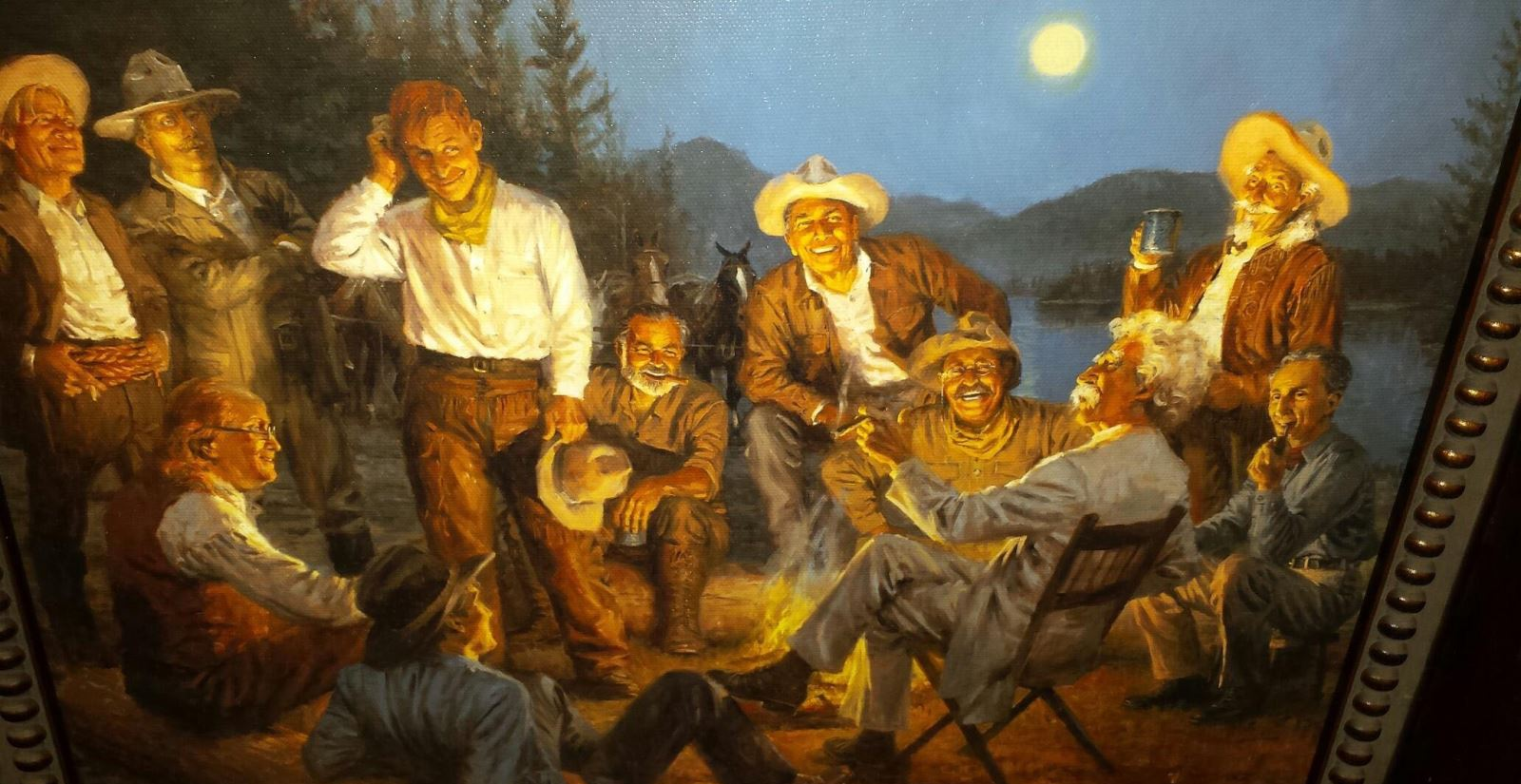 Topic: Memories of summers with Grandpa

My Grandpa, on my mother's side, died from lung cancer when I was about 12 years old. I know a lot of people that were 'raised' by their grandparents and/or have very fond memories of all the time they'd spend with their grandparents, but I didn't get to see mine all that often. Since my grandparents lived on the other side of the country, I only got to see them a handful of times for an extended duration when my sister and I would stay with them for about 2 months every summer, for 3 or 4 summers in a row.

Grandpa was in the Army. Airborne, if I remember right. I remember being told that he was on a "hand crew building roads in Texas" when I was really young, before I even have a memory of meeting him. That detail really lodged into my memory because he used to send me rattlesnake tails in the mail when he'd kill one with a shovel at work. Out of all the things I had in my room when I was a kid, that Whitman Sampler's box full of rattlesnake tails was my most prized treasure. I didn't know anyone else that had one, and I had a desk drawer full of about 50. That made such a big impression on me that when I was doing a survey last summer in NE Washington's rattlesnake country, I was absolutely determined to bring my daughter home a rattlesnake tail. I ended up getting one on the last day we were there, which the dog ate within an hour of giving it to her. (He also ate her umbilical cord the day it fell off. Disgusting Bastard.) Anyways....

By the time I was old enough to remember meeting Grandpa he was a truck driver in New Mexico. Mainly cattle feed. Even when we would stay with them for the summers, I felt like I didn't get to see him very often because he would leave for work around 4am, and usually get home around 4pm and go to bed around 7pm. He would occasionally ask me if I wanted to "haul a short one" with him, but Grandma said I was a heavy sleeper and he could never get me out of bed at 3:30am. It's funny to type out "...he would occasionally ask me...." because I don't have a single memory of him actually speaking. Not one memory of his voice, his lips moving, a specific phrase or sentence. Nothing. The closest memory I have of him making a sound is the subtle, whistling laugh he'd make when he quietly farted and was waiting for Grandma to notice it. I do regret not going on every ride I could with him over those summers, though. I know he's the exact type of man that I like hanging out with nowadays. Salt-of-the-earth type of guys like my neighbor, where a commitment and a handshake mean something.

Grandpa loved watching "Wild Discovery" on discovery channel during dinner, which is why Grandma normally would eat dinner on the back porch. My sister started eating dinner on the back porch with grandma after she decided she was a vegetarian. (She turned into a vegetarian overnight one year because our neighbors butchered a cow she got attached to right outside our kitchen window). So for the rest of the summer, Grandpa and I had dinner together on the couch and we'd sit there chewing on chicken or sausages or whatever while watching Hyenas or Lions rip apart one mammal or another.

My favorite memory with Grandpa was his "midnight snacks" that I started joining him on. Every night at exactly midnight, he would walk into the kitchen in his tighty-whities to drink a tall glass of milk and eat one of those little pecan pies before going straight back to bed. I had pajamas on the first time I got up with him for a midnight snack with him, but decided to rock the tightie whities from there on out. He'd pour both of us a big glass of milk and get a little pecan pie for both of us. We'd sit there and eat them quietly, down the milk, and go back to our beds without saying a word. I think I had it stuck in my head afterwards that "real men don't talk much" because of those experiences. One night, much to my annoyance, my sister decided that midnight snack time isn't just for boys and she would join us. Maybe I'm wrong here, but I think it annoyed Grandpa too. He had two daughters and I was his only grandson, so he liked "guy time" and this was about the only thing my sister wasn't explicitly invited to. Luckily she only joined us once because a grasshopper jumped on her foot while she was drinking her milk and it scared her so bad that she blasted half of the cup of milk out of her nose and right back into the cup again. Grandpa made her finish the whole glass anyways because nothing goes to waste in that house, so we never saw her at midnight again.

I have a handful of other stories about summers with grandpa, like the jeep breaking down in the desert and getting blisters on my shoulders while walking back to town with him, but I'll save the rest of them for later.
Click to expand...

i am shit at telling stories but was looking at some pic about Asbestos today and got me thinking about my experiences with it.

Topic: Asbestos
Job Interview
When i was 20, went to interview for a job doing asbestos abatement. it would have paid great but had some huge drawbacks. training/license was through a 3rd party and cost around $800, if i remember right, that was including health check, class and room/travel. they could loan me the money as a payroll deduction, but if things didn't work out would have to pay it all back there and then.
their current jobs were about 5 hours away. New workers had to provide own transportation, but after a few jobs could ride in the vans. Jobs started at 6pm Friday night and ended 6am Monday morning, would get at least 40 hours. the interview got sorta weird at this point when i asked about the odd hours. guy said, at no point was i allowed to tell anyone what i did or where and would have to sign non-disclosers for each job. the company having the work done would tell everyone the building was having some cleaning done and they would need to leave before 5:30pm. if anyone asked, could only say i was there to clean.
that is when i realized, i had gotten the interview through a program the town was running. the lady told me it was asbestos abatement, but the paperwork/job listing didn't say that. the company listed was just a person's name and job was just worker. there was no name on the building, none of their work shirts, equipment or vans had any names/logos on them.
the guy then started talking like i had already accepted the job and started giving me paperwork and started talking about what i would be expected to do day one after training. told him i need to think about it and left. it was one of the strangest interviews i ever had. still wonder if it was some sort of scam or just companies being scummy and trying to hide asbestos from the workers.

Asbestos Exposure
few years later, got a job at a major state college. they had just finished asbestos encapsulation in 5 dorms and few other buildings. the campus equivalent to OSHA had meeting with all department to talk about asbestos. one thing i clearly remember was a part about airborne exposure. guy said "one particle could cause cancer" and gave out cards and call to report it.
a couple of weeks later, i am in a cramped dorm basement with 7' tall ceilings before the encapsulation. in slow motion, i watch a guy pick up a bed frame at try to stand it up vertically and scrape a 2' long by 3' wide section of the encapsulation clean off and gouge 2 trenches about inch deep by 2' long into the ceiling. the shit went everywhere, it was like being in a snow globe. everyone just covered their face and rushed out.
i call the OSHA wannabes and tell them. guy said they will set up a test for it. the test last 4-6 hours and they will take an avg of airborne particles to warrant any action. stopped him and said we are not playing with it, but had a accident that messed it up. his reply was like, oh ok, we will contact someone to clean up and repair it, you should be fine.

Mexican asbestos abatement
asbestos encapsulation was a failure. kids picked it off the ceilings in dorm rooms and apparently tested vertical jump by seeing how much they could grab in hallways. the next round of buildings got total removal done. once again OSHA wannabes show up to tell us about how it works, the outfits and all that. they are supposed to have head to toe ppe, the work area sealed off with plastic sheeting, go from that straight into sealed shower box and take off their ppe.
it is like 90+ out, me and couple guys are watching them work. this dorm has a motel like setup with a covered outdoor walkway and now it has walls of clear-ish plastic. it had to be like hell in the building as even with windows open and fans going the rooms were hot. it is almost lunch time, the guys start coming out 1 by 1. they are wearing full face masks with air, no shirts and mostly shorts. they come out of the work area and stand in like a black plastic kiddie pool while other guy sprays water on them. one guy said, i guess codes don't translate into Spanish.
Show hidden low quality content
You must log in or register to reply here.
Share:
Share