4 new Challenger decks coming out in March. I swear they are determined to make sure 98% of recently released cards are printed until they are worth 15 cents or less each. Which, I guess some people think is a good thing /shrug I'm not one of them.

Take a look at the decklists and strategies in the latest Challenger Deck release!

I would probably buy the MTG:A codes (if they had them) for those products off of eBay for $5-$6.

Strixhaven school colors with a card from each: The First Lesson: Introduction to Strixhaven

Class is starting soon. Here's what you need to know about your enrollment at Strixhaven: School of Mages.

Also shows 3 of the 63 special reprints with new art - Demonic Tutor, Opt, Swords to Plowshares. At 1 per pack and 3 per collector booster, they sound fairly common. The new art style of these reprints does absolutely nothing for me.

Some of the alt art Japanese cards for the set. They looks really nice but also dont really look like MTG cards. Yeah, the japanese demonic tutor is gorgeous, but someone walking by an EDH table is going to have no fucking clue what game you're playing at this point.

Prismari Command is spicy, it's like Kolaghan's Command and Izzet Charm had a retarded love child.

They look sweet and I'm a sucker for all of them but the memes have been good as well. 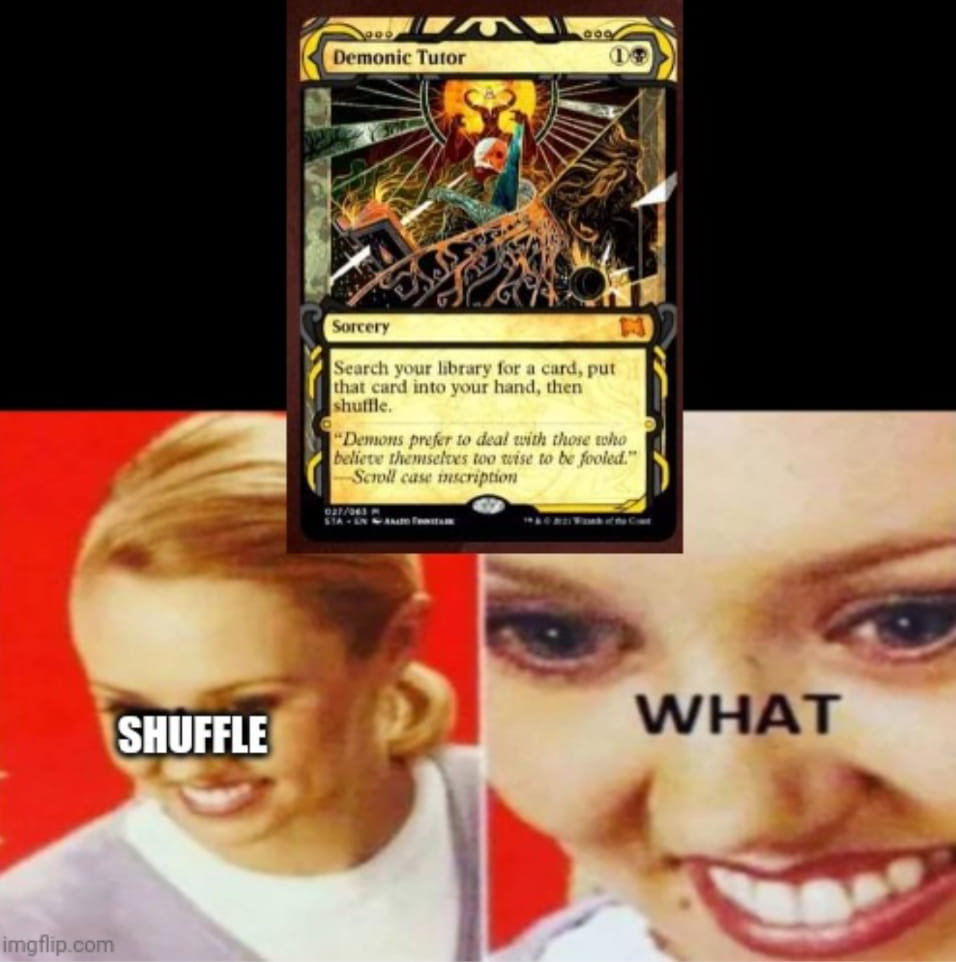 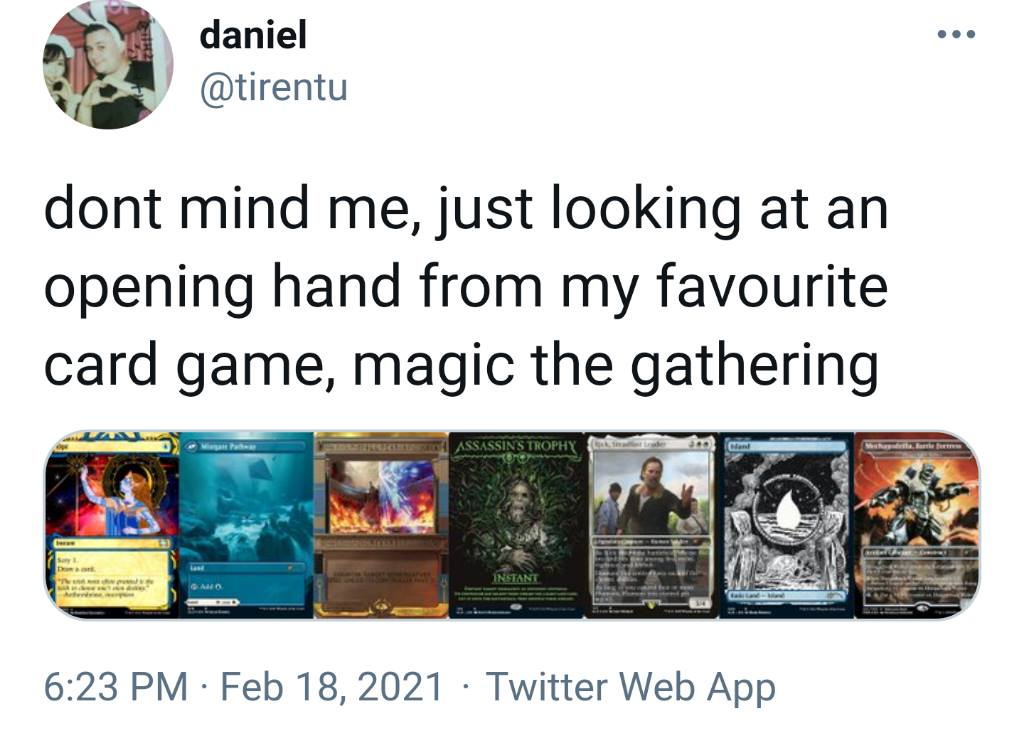 I was given heavy green, some red, splash of blue. barely even saw white or black rotate.

I had like no tricks. just decent bodies, +1/+1 counters and haste.

Guy to my right was going wide + anthem effects and a big ass 10/12 buffed up wall.

Guy to my right had a nasty pod of whenever a creature dies all opponents lose 1 + free sac outlet + creature that allows him to cast from graveyard. So he was chump blocking and sacrificing, draining us for unblockable damage. I hit hard initially, but ran out of steam and didn't really have anything coming.

I drew a whenever you play a pirate gain control of a creature for the turn. I was hoping to gank a key defender and go over top, but his recursion engine had to end. He was up to 27 and we were at 9 and 11.

I was like, want to team up and take out his guy. If I gain control of it. He cuts me off and says, "You'll attack with him into my wall. Okay!"

So I play my one fucking card . and attack into the 27 health and send the recursion dude into the wall. and he smiles and tells other guy "Want to make a deal" He chumps a token and recursion guy survives. returns. and now we're at 5/6 life. talk about pissed. disappointed.

So what happened? I drew a cascading phoenix +2 counters attack the token dude for lethal and play a changeling and steal the sac outlet and attack for 20 dmg after blocks. I had blockers for black player assuming he couldn't auto damage 5. but white player cast instant reach on his wall. if he survived that, I wouldn't have enough blockers for both. so fuck him I sac 5 guys with stolen Rakdos dragon. he loses 5 life I lose 5 and am at 1. white player gets super salty. and black player is like lose 1.

I had never experienced that before, so there's kudos to that but oh man I got heated for a moment

Picked up a Foil Full art Ron Spencer Mana Crypt in a trade, which was probably a dumb use of trade equity. Do I further compound the bad choices by getting Ron to sign it? Basically all my Ron Spencer cards are signed by him, including the commons, because when he was still an active artist for the game he lived near town, so he'd come to the prereleases and sign everybody's shit for free. I've got fucking heaps of Skirges. So it feels like tradition dictates I should get it ruined.

Being forced to (should you ever want to) sell it on Ebay/Facebook vs being able to sell it anywhere.

Really not feeling those factions.
Reactions: zzeris and Rime

Eh, not getting potter vibes, it's Wizard College. The houses track much more closely to degree programs than any sorting hat nonsense. WotC has done wizard academies before as prominent plot locations/points.

If anything it's more weeaboo shit story for the Kenrith twins. Already had a Tournament Arc for em, so obviously need a magic school.

Main reason it's not Potter vibes is because it appears to be fucking grown adults cosplaying cartoony Harry Potter houses instead of school children. That kind of infantilism a big SJW trait.

When I was a kid I thought all those Wizard schools in Invasion were awesome. They looked dark, mysterious and powerful. They didn't look like they were having loads of fun with their fighting poses and costumes.
Reactions: Rime

College is for big infants now, so it makes sense
Reactions: fanaskin

Kuro said:
Picked up a Foil Full art Ron Spencer Mana Crypt in a trade, which was probably a dumb use of trade equity. Do I further compound the bad choices by getting Ron to sign it? Basically all my Ron Spencer cards are signed by him, including the commons, because when he was still an active artist for the game he lived near town, so he'd come to the prereleases and sign everybody's shit for free. I've got fucking heaps of Skirges. So it feels like tradition dictates I should get it ruined.
Click to expand...

Ron is awesome, ship it to him with some cash and sometimes he'll do some random doodle alters on them as well. Never know what you are going to get and it's great.

Edit / Disclaimer: I have a huge weakness for signed stuff and the vast majority of my collection I have no intention of ever selling.

Hasbro investor call today:
-WOTC is now a full division of Hasbro, no longer a subsidiary of their Traditional Games group
-Warhammer 40k Secret Lair
-Lord of the Rings Mainline Expansion Set (probably same slot as the D&D set this year, but for 2022)
Reactions: Lasch

The 40k cards will just be a Secret Lair and not a set or collectors cards? Bummer.

Well, The Walking Dead secret lair were all functional new cards, so I imagine 40k will be too.
Show hidden low quality content
You must log in or register to reply here.
Share:
Share