Sanrith Descartes said:
The value is there at $20 since you are getting 1:1 UMG shares at $14.75 and PSTH at $5.25. The other unmentioned fucked up thing is anyone holding PSTH in a retirement account has issues being able to exercise the future SPARC since you can just add 20 or 30k to an IRA to buy those shares.
Click to expand...

All depends on timelines though. You only put in your $20 SPARC cash after the SPARC deal is announced. It has a 5 year time horizon, so could theoretically take years (zero opportunity cost). You could have long since sold your post-IPO UMG, or any other holding in that ret acct, to fund the SPARC deal. You have the wonderful benefit of seeing exactly what deal / valuation you are getting. You will know if it is worth liquidating other positions to pile into SPARC at your $20/per leap price.

Jysin said:
All depends on timelines though. You only put in your $20 SPARC cash after the SPARC deal is announced. It has a 5 year time horizon, so could theoretically take years (zero opportunity cost). You could have long since sold your post-IPO UMG, or any other holding in that ret acct, to fund the SPARC deal. You have the wonderful benefit of seeing exactly what deal / valuation you are getting. You will know if it is worth liquidating other positions to pile into SPARC at your $20/per leap price.

I disagree with you. To invest in the SPARC you need cash. Cash sitting doing nothing is bad. If you hold 100 shares of PSTH then yeah its not a big deal. What if you hold 1000? That is 20k you need to exercise. So I should sell AAPL or MSFT so I can exercise the SPARC? Or hold 20k in a cash position. I promise you this specific detail was never considered by Ackman.

BTWN and GSAH seem to be the recipient of the PSTH hate in terms of money flows. Both doing well today.

GSAH just caught a bid. Spiked to $10.44 on considerable volume.

Jysin so this is my feeble understanding of the warrants. If you choose to redeem (the only real viable option) you will get 1:4 redemption ratio for PSTH commons "before" the deal is done. This means you get 1:4 more shares of stock which in turn become UMG, PSTH and SPARC. That comes out to about $5.20 value plus the SPARC value. This is why the warrants are bottoming out around $5.50

Otherwise, I "believe" they will turn into PSTH part duex shares worth 5.25 on a 1:1 basis.

Or I am totally wrong.
Reactions: Jysin

Im back to green on my BTWN Dec 7.50 strike calls again. Thanks Ackman. 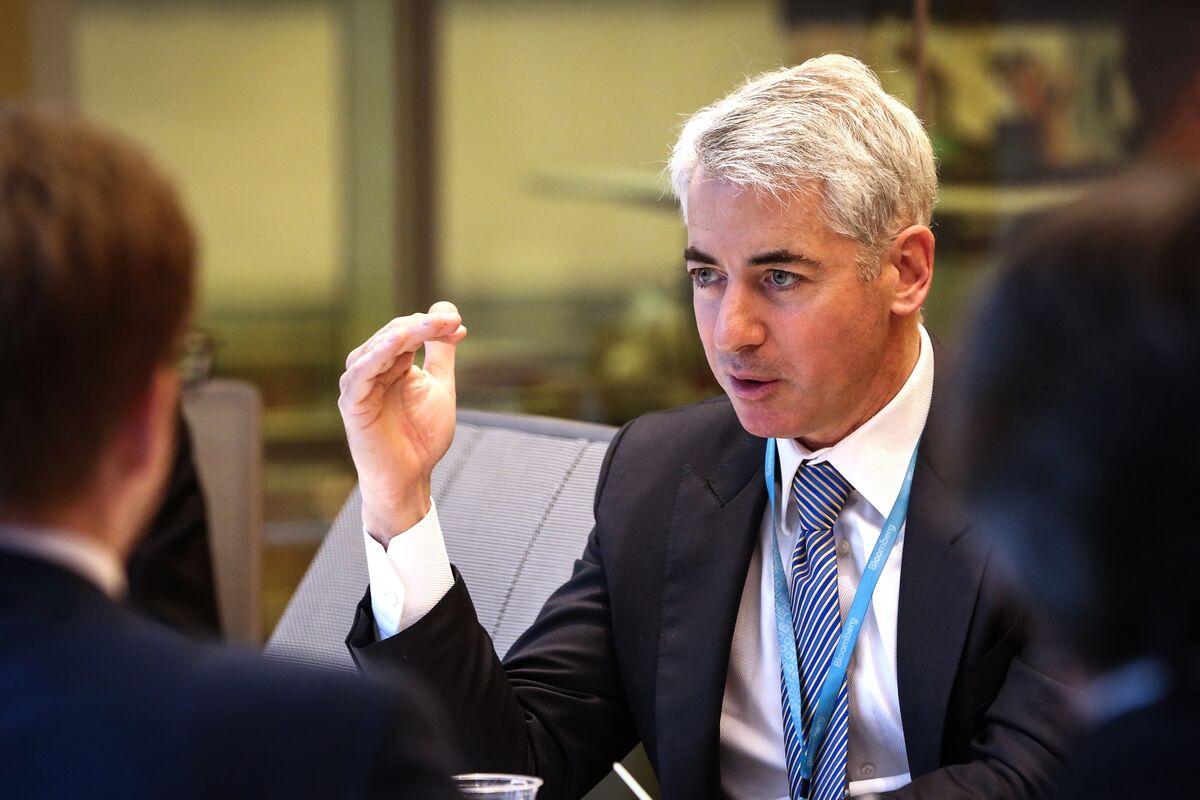 Sanrith Descartes the SPARC will be openly traded on NYSE. re your retirement funding scenario, you can sell the SPAR rights via the SPARC to someone else at any point.

From article:
A SPARC is a SPAC without a pool of money. It doesn’t have shares; it has rights. You own a right — a SPAR — and you can trade that, and the sponsor of the SPARC (Pershing Square Capital Management LP, Bill Ackman’s hedge fund) goes out and looks for a deal, and if it finds a good deal, it says “hey who wants to put in $20 for this deal,” and if you own a SPAR you can put in your $20 and get back a share of the deal. If you don’t own a SPAR, you can buy one from someone who does, and then put in your $20. If you do own a SPAR but don’t want in on the deal, you can sell your SPAR to someone who wants in. 1 The SPARs will, presumably, trade at some market price that reflects the market’s confidence that Bill Ackman will find and negotiate a good deal for the SPARC. If he announces a deal and everyone hates it, then no one will want to put in $20 and the SPARs will trade to zero-ish. If he announces a deal and everyone loves it, then investors will think, like, “I can put in $20 and get back $30 worth of stock in this awesome deal,” and the SPARs will trade to $10-ish. Etc.
Last edited: Jun 4, 2021

Yeah read it earlier. I am really thinking through the warrant thing. I have 230 warrants. I dont know that I want that much more UMG. If the math plays out then my guess is the new strike for the PSTH part deux warrants not redeemed will be right at $6 on the 5.25 commons price. Keeping them at 1:1 might pay off better if he makes a real deal for part deux with the 1.5 billion. That is still a lot of scratch to bring a company public.
Reactions: Jysin

A good simplified read that also asks good questions. I dont feel so stupid not understanding the warrants because no one else does because ti hasnt been laid out yet. 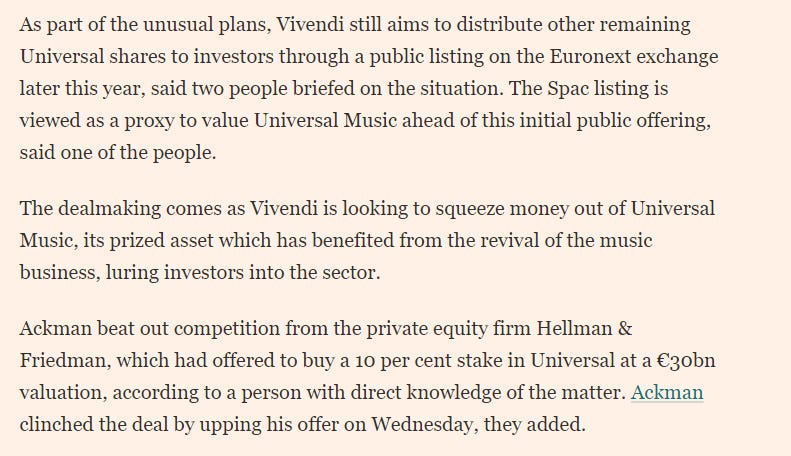 It’s happening. A few days ago, I called UMG my #3 most likely deal target for PSTH. When I wrote that article, a lot of the pieces for a UMG deal fit with what Ackman was saying in interviews, but the potential for a UMG / PSTH deal still left me kind of cold.

What are the odds this goes straight to $20 if the SEC doesn't approve all of this? Particularly the conured up SPARC idea.

Jysin said:
What are the odds this goes straight to $20 if the SEC doesn't approve all of this? Particularly the conured up SPARC idea.
Click to expand...

I honestly have no idea. 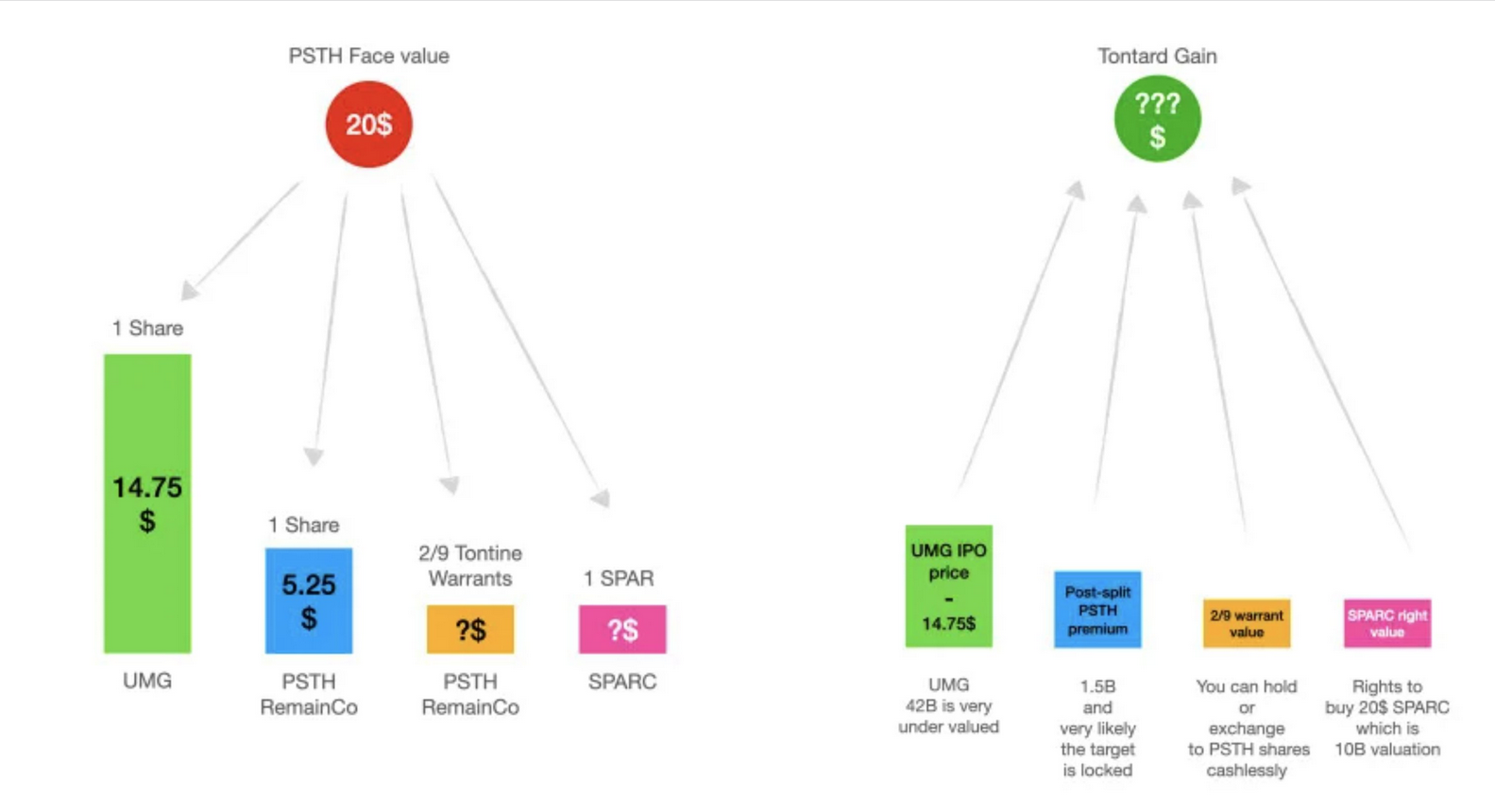 This just seems annoying to me.

Well, I've only got 100 shares of PSTH but I'm down $200-300 on the initial investment and see lots of people bailing and disparaging this. I actually think it's pretty interesting and I like seeing some new ideas. Not gonna lie though, given the loss already and lack of enthusiasm I don't know how enthused I am to stay in with this over adding the money to BTNB and BTWN and just sodding off. The main thing keeping me in is that I'm tired of taking these little $200 losses on things that really add up. It was different when the crypto market was surging and I had tons of house money to move around and play with. Now, it's more like all those little $200 hits are a death by a thousand cuts sort of thing.

This is so sad when we are calling 10.44 a spike in the SPAC world. Glory days are over, so glad margin calls forced me to liquidate most of mine!
Reactions: Sanrith Descartes

PSTH
I'm keeping up as best I can on this. Latest is that it appears PSTH filed a petition to co-list the UMG shares on the NYSE. This solves the foreign exchange issue.

I think this deal "doesn't suck" financially if you have a long term time horizon. The music industry isn't my favorite. Far from it. But I like making money. Their financial don't suck. UMG is doing a traditional IPO and we are getting shreas at the pre-IPO price. If this acts like a normal IPO for all we know it could ramp up 10, 20, 50% on IPO day. That could be a winner for a quick flip.

The PSTH remainco with its 1.5b+ in cash could also turn into a good company (or totally suck). It has potential to make money.

The SPARC for free is basically a zero investment profit opportunity.

I haven't lost any money on this deal. I have to ask myself if there is a place to put this cash in today's high priced market that can make me more money than this deal can. If we were in a down market and I had lots of places to push cash, I would have bailed already. I don't. This will sit as cash if I cash out. As of this moment I am leaning into staying the course. If the NASDAQ drops 10% on Monday then I sell PSTH and push the cash into FTEC. If we flatline for the next 3 months then PSTH seems the better place for now.

Wonder what PSTH is gonna open at. I mean it can't go down much further. Maybe it'll have a nice rally?
Show hidden low quality content
You must log in or register to reply here.
Share:
Share