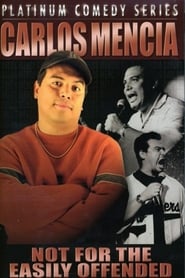 Title: Carlos Mencia: Not for the Easily Offended

Plot: Monologuist and provocateur Carlos Mencia covers -- with refreshing candor -- taboo topics that run the gamut from ethnic stereotypes and race relations to immigration, war, patriotism, capitalism and family. Mencia represents the small voice inside all of us that demands we admit to thinking what he has the cojones to say out loud. You'll laugh, get red-faced in embarrassment and, most of all, pause to contemplate what Mencia has said.
Reactions: Otto and Nevele

Overview: Brothers in Law is a British television series inspired by the 1955 comedy novel Brothers in Law by Henry Cecil Leon. It first aired on the BBC in thirteen half-hour episodes between 17 April and 10 July 1962 and followed the trials of an idealistic young lawyer entering the legal profession. The series was adapted by Frank Muir and Denis Norden, two of the most prolific sitcom writers of the era, as well as Richard Waring.

The sitcom gave Richard Briers his first regular starring role in a television series; he also worked with writer Richard Waring and producer Graeme Muir on Marriage Lines in the same period. The series was also the TV debut of Yootha Joyce and the final episode inspired a spin-off series, Mr Justice Duncannon featuring Andrew Cruickshank. A BBC Radio 4 adaptation featuring almost the same cast was broadcast for 39 episodes between 1970 and 1972.

Reactions: Dacianprick King In The North, Izo and Nevele

I might report myself for this one. I laughed. But it’s really bad. Really bad.
Reactions: Jim Russel and Izo

You guys have shit taste in comedy

I've become obsessed with 2 Bears 1 Cave, every episode is just digging deeper and deeper into how weird Bert is.

Reactions: Harshaw, Kiki and Lodi
A

No Carlin? What the fuck is wrong with you people?

That Philadelphia incident is comedy legend.