(trailer is from the kickstarter but it's already been produced, with a 2nd printing due sometime this year)

Finally got to bust this out and play it properly on the weekend and really love it so far. It had sat on my desk unboxed for over a week as I worked out how to organise it and play through some practice rounds. The mechanics are really cool and make the game unique compared to most dungeon crawlers. I liken it to a cross between Scythe and Concordia, though that doesn't really come close to describing it.

Managed to get 3 scenarios done, first with 3 players, Scoundrel, Tinkerer and Cragheart, with the Tinkerer leaving before the last one. I highly recommend reading the faq on bgg since there's so many rules and its easy to misinterpret some of them.
Reactions: Conefed

It's funny, this was a kickstarter I looked at, but went "Ohh no monster mini's? Ehhhh I've already spent a thousand dollars on kickstarters this year, and if its bad I don't even get mini's to re-purpose for dnd.. PASS."

Then it came out a few weeks ago, I heard buzz, watched a few hours of it online, and kicked myself.

Really wish I could play this. I'll pick it up as soon as its available! #Jealous
Reactions: Conefed

I am really enjoying it but I really wish there was a great storage solution. Something like the broken tokens Mage Knight one that makes setting up and tearing down a lot faster.

Looks like there's a kickstarter for the reprint coming in April for anyone who's missed out. (will be an addon for the founders of gloomhaven kickstart but you can opt to just order gloomhaven.)
Reprint confirmed. | Gloomhaven | BoardGameGeek

Can't recommend the game enough. No doubt I'll burn out on it soon but I have it permanently setup and ready to play since I get 1 group session a week and usually a couple of solo sessions.
Reactions: Conefed
T

Game is amazing. Its hard too. But there is no real penalty for failing a mission, beyond personal frustration. Mechanics are very tight.
Reactions: Conefed
M

Does anyone know how this compares with Descent? Seems like it's a very similar type of dungeon crawl not counting the Overload role. Which they made full cooperative using the Road to Legend app.

This looks great but a bit disappointing that the new Kickstarter won't ship until the end of Summer. Was hoping to be able to play this with people before they all scatter to the 4 corners.

Really excited for this game and just pre-ordered it. Me and my girlfriend just started playing board games together about 6 months ago and I'm a little concerned about the step up in complexity to this from something like Pandemic, Castles of Burgundy, Puerto Rico Etc. but looking forward to it. She's real pretty new to gaming in general and I'm pretty new to board gaming.
D

Played this last sunday. Loads of fun. It's basically D&D without dice and the open endedness that roleplaying and playing with a DM gives. This makes it excellent for playing with people who don't have the time or inclination to get deeply invested in role playing games but like the cooperative dungeon adventure and strategy. Also, not requiring a DM basically takes away the biggest hurdle to get a group together. Difficulty is there, but not immense and if you start the game on easy (it has a very well-done difficulty system) there should be no problem for beginners. It's also highly scalable in terms group size. Highly recommended.
Reactions: Conefed

If we're going to play the hell out of it I have no problem ordering something like the Broken Token organizer. What are people using to organize this game beyond a bunch of bags? Going to watch some more demos and try it myself before going into our initial sessions, whenever that may end up being.
Reactions: Conefed

My friend went with Plano boxes. I think he will end up getting the organizer from Broken Token if we end up playing it a lot, as he will be traveling to my house with it when we do. We're both hooked on Kingdom Death at the moment though, so not sure when I'll be able to recommend anything based on experience.
Reactions: Conefed

3 sessions in on this. First two there were 4 of us, but my gf bowed out after the second, just not into it. So far all of the games have come down to the very last round on the normal difficulty. Its been fun, I'm really excited to see where it goes, but I have two issues with it.

1. It can drag. Our first game was like 7 hours, almost all of that was people just not knowing what cards to play. Second game was still 5:30 hours. Third game was 4 hours (that was with one less person, which really helped). I feel like the game would feel best with 2 players as far as time goes, but that's just a guess. I imagine it will speed up a little bit more as we really learn our characters, but yeah, I find myself waiting on other players quite a bit, with nothing to do.

2. The exhaustion mechanic. I understand it's there to balance the game, but geez does it feel punishing. I've never even thought of going out of my way to get money or anything, you just have to beeline for that goal. Also, we pretty much never use our awesome "lose the card" powers, because its just utterly crippling to your hand. I feel like it's slightly over tuned. Like, if we just had 2-4 more cards in our hands so many more options would open up.

Like I said, I'm enjoying the game, it can just be rough. (Probably didn't help that our road event on mission 3 mad us all start wounded with 4 down.)
Reactions: Conefed

Three sessions in, absolutely love this game. Playing with four and we lost in the tutorial, won the second one with literally one person left and down to the final card draw, third mission went really well with three of us up still and lots of cards left.

To give some other feedback I do not like Descent as much as I thought I would and never got into the campaign, even after CPU GM was made. Massive darkness needs some serious house rules to be fun and neither are as good as Gloomhaven.
Last edited: Jan 1, 2018
Reactions: Conefed

Talked my friend into backing this since I backed Kingdom Death. Haven’t played it yet since we’re in the middle of KDM campaign but it seems like it will be everything I wanted Descent to be.

Did some quick painting of the starting miniatures to make them look a little better. They’re pretty crappy miniatures but I know that isn’t the point of the game. 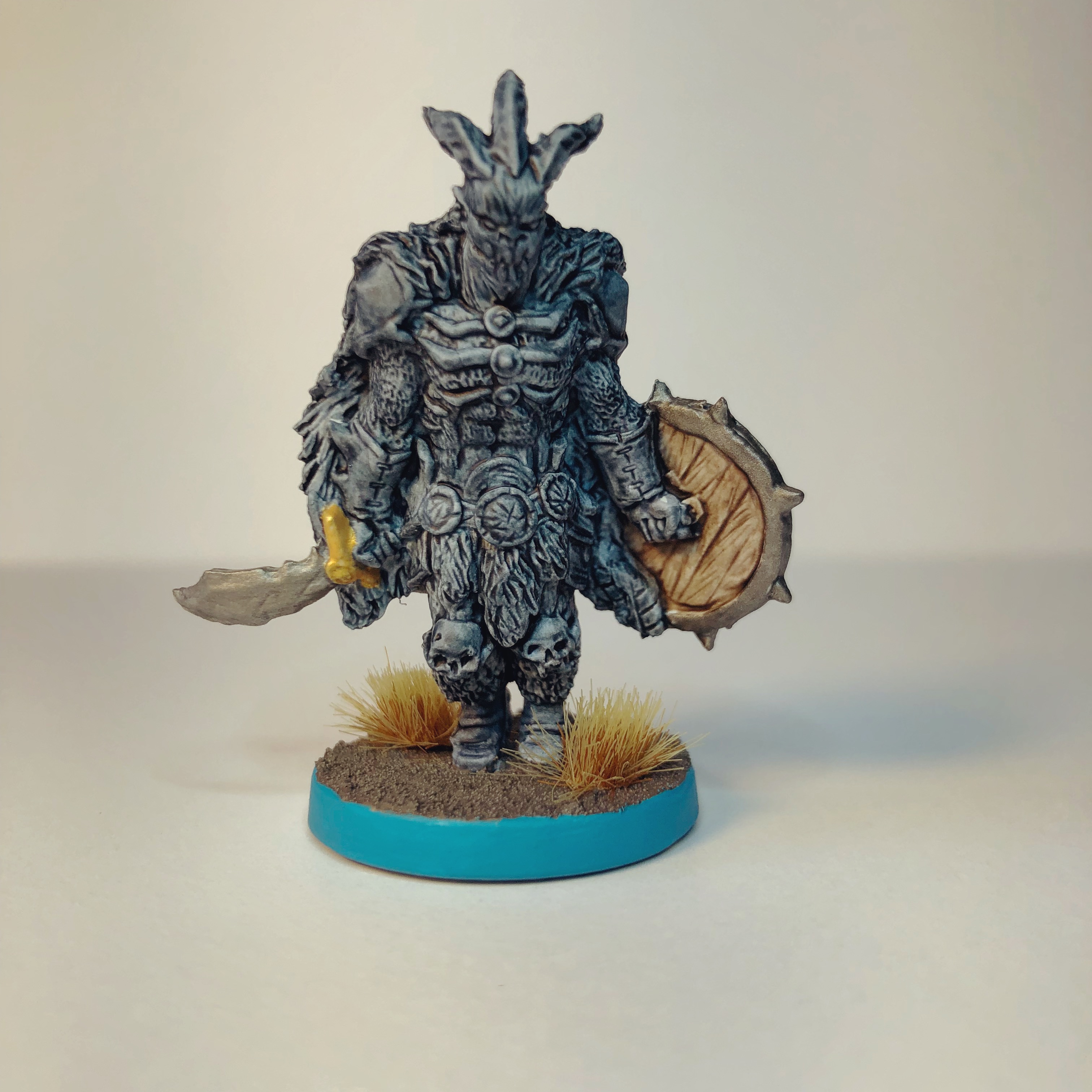 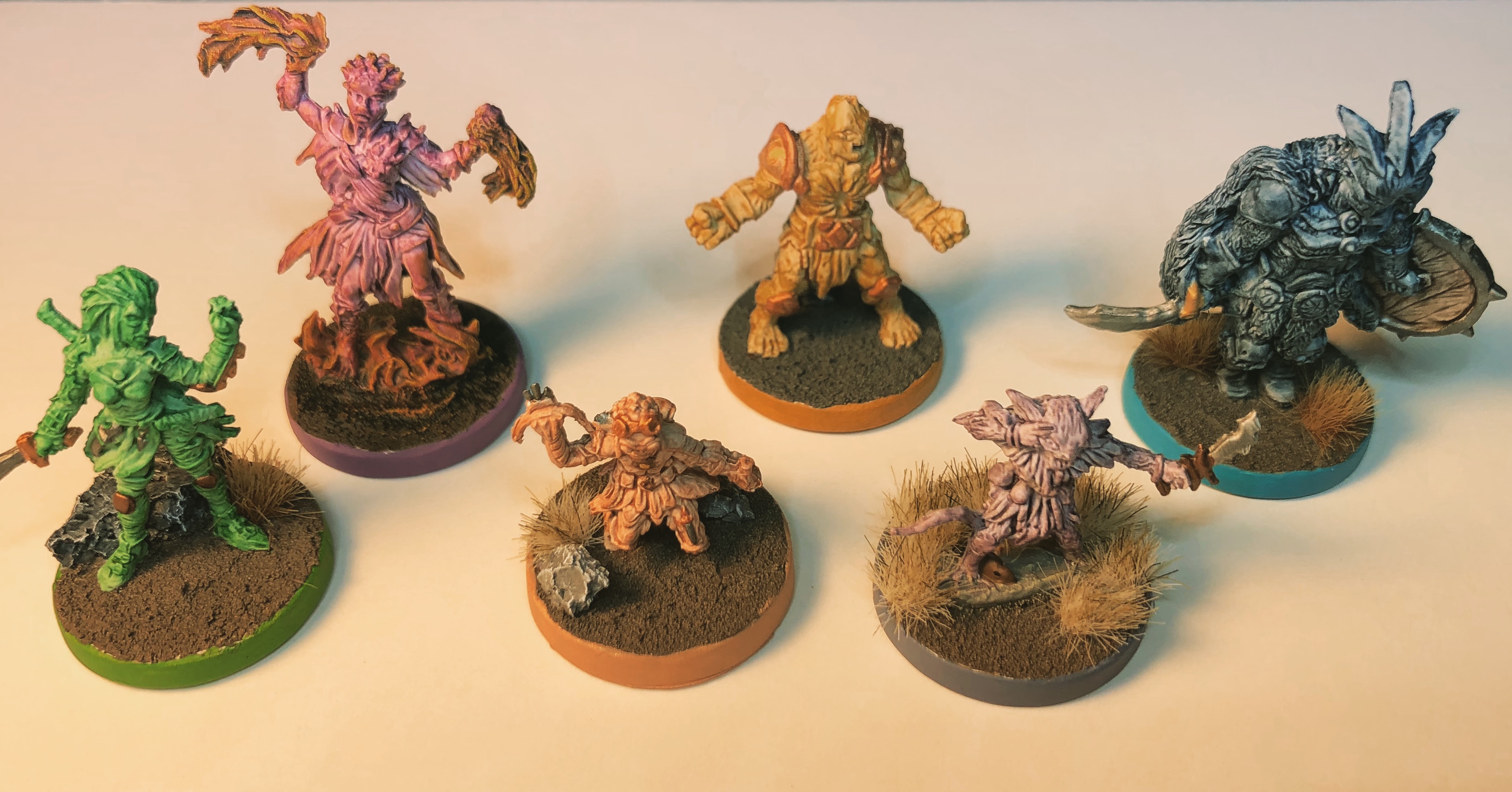 Some pics of tonight game. 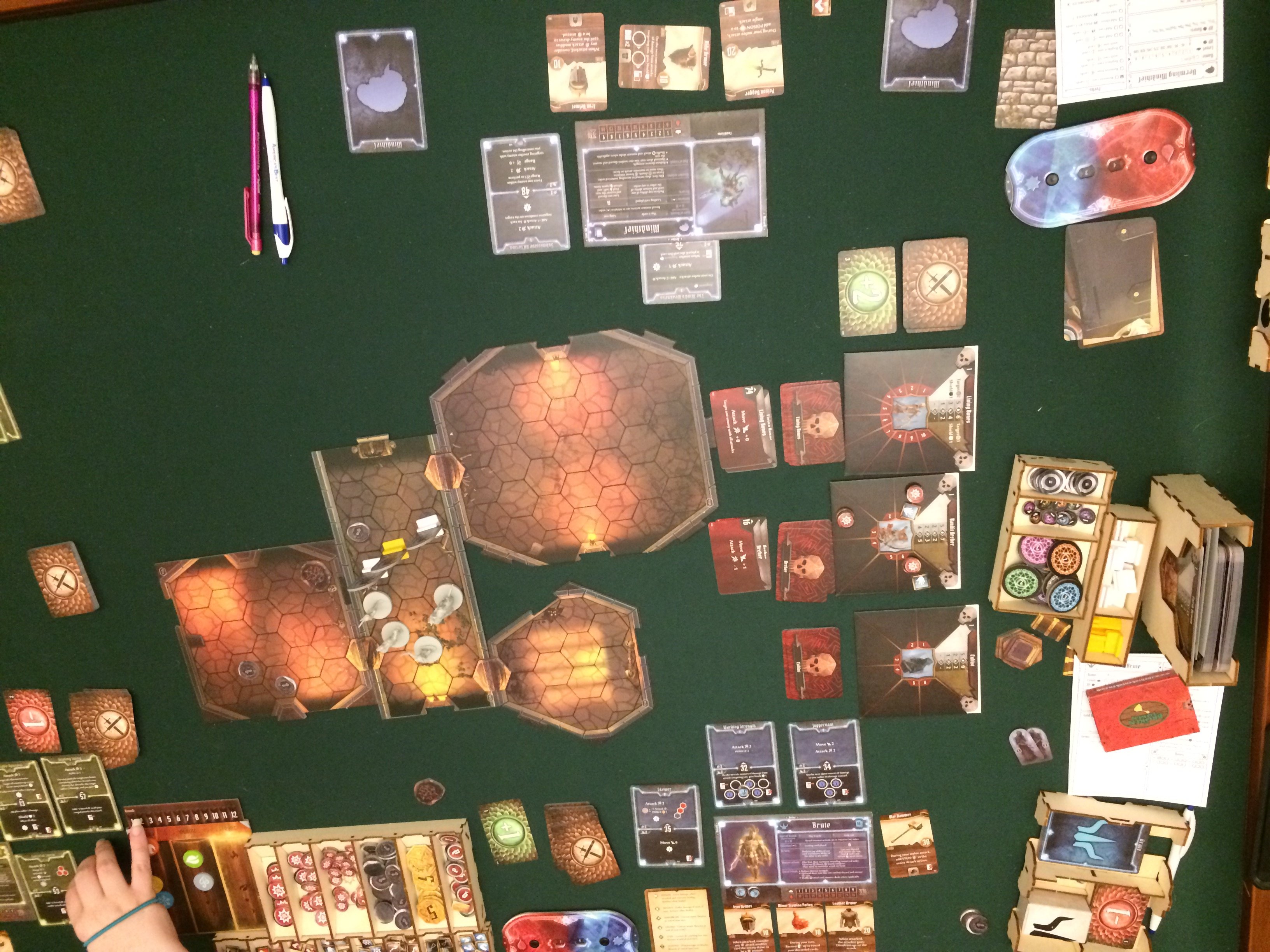 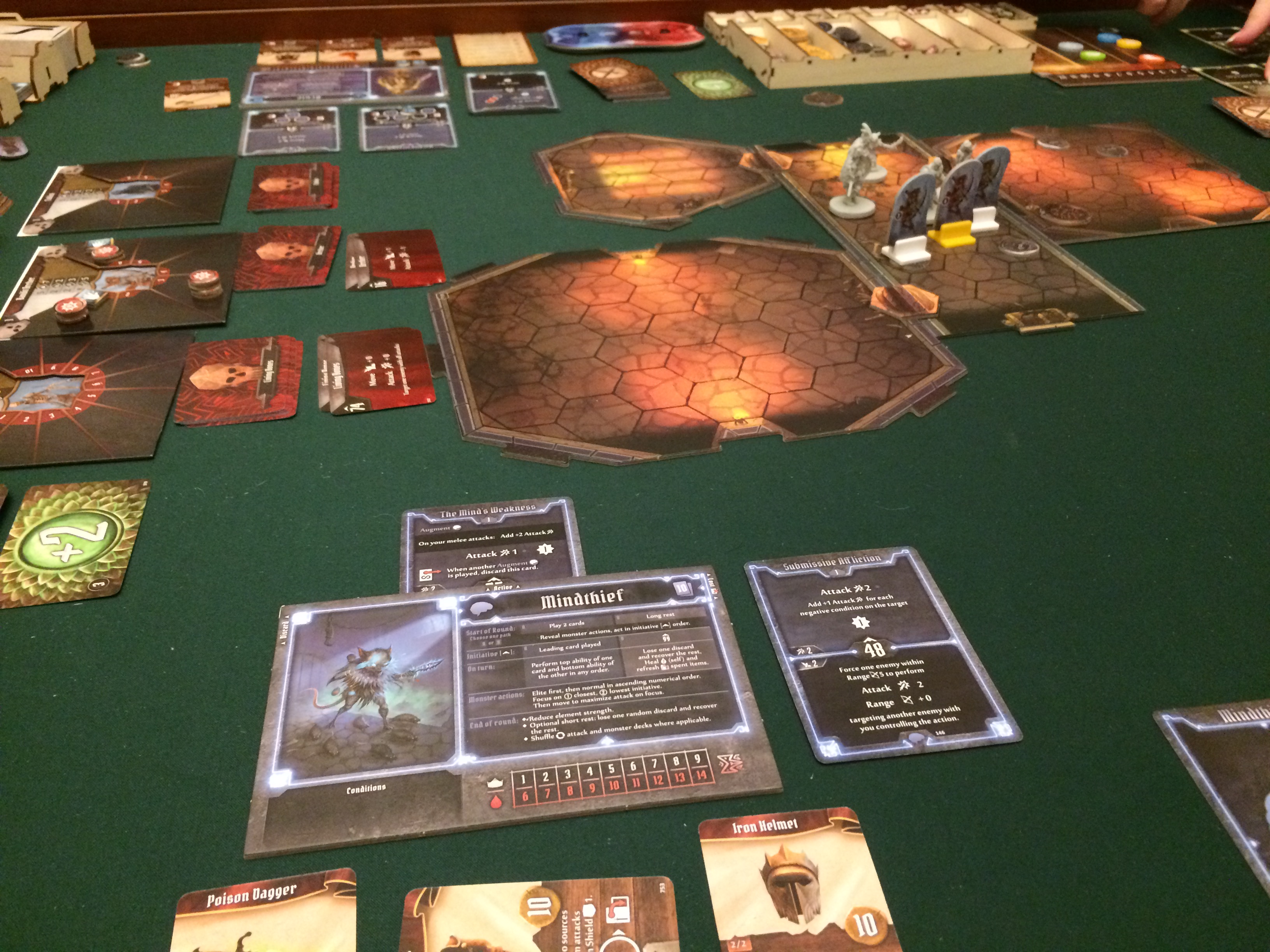 Another successful scenario, this one we cruised through(for the most part) Once everyone learns their rolls/what their class can do it really starts to come together. I get the feeling though we going to hit some seriously strong enemies though and get fucked up.
Reactions: Conefed

Hatorade said:
Another successful scenario, this one we cruised through(for the most part) Once everyone learns their rolls/what their class can do it really starts to come together. I get the feeling though we going to hit some seriously strong enemies though and get fucked up.
Click to expand...

Your classes get upgraded or force retired as you play too don’t they? Maybe some challenge of trying to relearn new classes all the time.
Reactions: Conefed

Hateyou said:
Your classes get upgraded or force retired as you play too don’t they? Maybe some challenge of trying to relearn new classes all the time.
Click to expand...

After so many quests+campaign progression. Mine seems a long way off, the Scoundrel though is barely level 2 and might be forced to retire in the next mission or so depending on what we choose.
Reactions: Conefed

I bought the Plano boxes (Bass Pro Generics) but need to buy the thin one from Amazon or something. Looking forward to getting it all organized this weekend.

We've still only completed Blackburrow, we slow and haven't gotten together as much thanks to the holidays.

meStevo said:
I bought the Plano boxes (Bass Pro Generics) but need to buy the thin one from Amazon or something. Looking forward to getting it all organized this weekend.

We've still only completed Blackburrow, we slow and haven't gotten together as much thanks to the holidays.
Click to expand...

The guy I play with bought Gloomhaven Organizer
They work really well, and tailored to fit everything very nicely.
Show hidden low quality content
You must log in or register to reply here.
Share:
Share