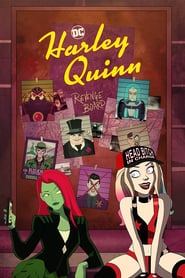 Overview: Harley Quinn has finally broken things off once and for all with the Joker and attempts to make it on her own as the criminal Queenpin of Gotham City.

Just heard about this recently and it's way better than I was expecting.

Animated ultraviolent comedy series. I think It's only a DC online thing though so it might not be long for this world. Which is a shame.
Reactions: chthonic-anemos

seems kinda like Robot Chicken. if its woke, it feels like a parody of wokeness. looks funny.
Reactions: atwakom

I assume the writing has gone downhill and they're scraping the bottom of the barrel for any new cash grab these days. Then if they really try to hammer an agenda you can start looking for which corner of the barrel they crawled out from.
Reactions: Mudcrush Durtfeet

Really enjoying this far more than I thought I would.

This was good. A lot funnier than I expected.

It's "SJW" insofar as Harley is trying to be taken seriously and get away from being seen as the Joker's girlfriend, but it's pretty much complete parody, witness the reactions to Dr Psycho calling wonderwoman a cunt on live TV for example ;p
Reactions: Mudcrush Durtfeet

Hard R violence and language, yet they won't show a pair of tits or ass...

It's HQ she uses sexual manipulation.. Ffs...her name.... But no, tis americuh - we can have ultra violence gore and language but oh my goodness a boob!
Reactions: Mudcrush Durtfeet

Xadion said:
Hard R violence and language, yet they won't show a pair of tits or ass...

It's HQ she uses sexual manipulation.. Ffs...her name.... But no, tis americuh - we can have ultra violence gore and language but oh my goodness a boob!
Click to expand...

Its a cartoon. Draw a set of tits and tape it to the monitor.

Bleh that's not "why" ... it's that the removal or absence of sensuality and nudity is sometimes jarring to the story they are wanting to tell...

If we want cartoon boobs Japan has us covered

Have seen a random episode of this, Episode 5. Was okay, will probably watch the rest. Episode would have been great, but then they went all Harley empowerment angle with her taking control of her subconscious from Joker.

Generally empowered Harley Story-lines are trash; its just not a good aspect of the character, it betrays a fundamental aspect of the character. Harlequin is a play on the story type for a reason. However, Harley being a fucked up kind of mother figure for the group could actually be interesting, so will check out the rest. (They did a good job of stopping the empowerment bit short of actually getting into the feminist angle and focused mainly on it coming from her as a character rather than an aspect of her ideology, so giving them the benefit of the doubt. )
Last edited: Dec 31, 2019
Reactions: Mudcrush Durtfeet

atwakom said:
There's no wokeness so far, quit being such faggots.
Click to expand...

Opening line is a bunch of rich men whose leader says "My fellow whites...." and talks about fucking over the poor.

Lithose said:
Opening line is a bunch of rich men whose leader says "My fellow whites...." and talks about fucking over the poor.

yes of course there was wokeness, but it was done tongue in cheek, as if mocking its stupidity.
Reactions: Mudcrush Durtfeet and LachiusTZ

Lithose said:
Opening line is a bunch of rich men whose leader says "My fellow whites...." and talks about fucking over the poor.

It was Joker in disguise wearing the guy's actual skin. He was fucking around with them before murdering them lol
Reactions: Mudcrush Durtfeet and atwakom

This show is stupid silly fun. Yall need to chill out, you are just as bad as SJWs.
Reactions: Mudcrush Durtfeet

It was already precious with just Harley and Ivy, but adding in Clayface, Dr Psycho and King Shark has been excellent.

Forced the NYE guests to watch the first episode and they demanded we continue watching the next two as well.

It's also run by the same people who had done Powerless, that DC comedy on NBC a couple years back, which is why we are seeing Alan Tudyk (already the hardest working man on DCUniverse) Ron Funches etc.

It's clear that they really needed this R-rated animated platform to be able to let loose.
Last edited: Jan 2, 2020
Reactions: atwakom and Jorren

Cybsled said:
It was Joker in disguise wearing the guy's actual skin. He was fucking around with them before murdering them lol
Click to expand...

Yeah, I saw the episode. This really doesn't change anything about it though. Flip the races in that situation, would it be funny? "My fellow blacks". Would it be funny because Joker was pretending to be a black guy? No, it would just be really odd.

I mean, I'm not angry at the joke. It was just stupid and made no sense to anyone who isn't in the cult and would go "har har, I get it, because white people..."

Jorren said:
This show is stupid silly fun. Yall need to chill out, you are just as bad as SJWs.
Click to expand...

No, because the SJWs are delusional and see things that aren't there. While people who hate SJW shit typically point to literal dialogue or interviews by the creators.


Because she's a woman. Difference is they have a penis. Not woke, guys.

Its entirely possible for something to be good and still focus on gender/race but lets call a spade a spade fellas, there is A LOT of social justice commentary in this show. Its just presented in a way that's still somewhat funny, except for when it falls flat--like the opening line. And unfortunately there are quite a few of them (Not enough to ruin it, but enough to cringe at, especially in a medium that's been 'woke' since the 50s. In this case, a lot of female villains have crews. Cheetah, Talia Al ghul, Enchatnress, Morgaine Le Fey,Chesire, Lady Blaze, Madam Zodiac,Granny Goodness; so why is the joke that no one will follow Harley because she's a woman, and not because she's as psychotic masochist?).
Last edited: Jan 7, 2020
Reactions: Mudcrush Durtfeet, velk, Qhue and 1 other person
TV show information provided by The Movie Database
Show hidden low quality content
You must log in or register to reply here.