Jozu said:
Too bad Sandhagen clearly won the 5th round. He landed so many more clean strikes. There is no fucking way Dillishaw won round 5. He was game the whole fight, and didnt back down once, but Cory should of won that split. He won round 2 and 4 no doubt. TJ won round 3, and maybe round 1. Sandhagen won 5. The judges got it wrong.
Click to expand...

tj was fence fucking cory half the time, and to the judges that meant tj was in control > strikes or damage

Cory also caught him in a reverse triangle for a bit there, TJ spent 17 seconds synched up in round 1. If you gave Cory round 1 he should of won unanimous imo.

Such ridiculous judging the whole night. Pressing someone against the cage and doing nothing but sniffing their back is how DC won most of his fights though, so..

A lot of the blame is on Cory though. Just fucking keep attacking TJ's right side where he has almost 0 vision. Instead, he kept trying to get the "wow" finish.

Stand and stall and cage pressing is making a big comeback this year I noticed,

If you're an OG viewer here you guys might remember the referee crackdown on stand-and-stall that happened during the golden age. Rogan would bitch about it and the UFC and refs finally all started to break up stand and stall action quickly.

Now it's full circle again and feels like stand and stall is back with a vengeance. It's really the most garbage strategy.

it was too boring to watch, but was tj also foot stomping too? 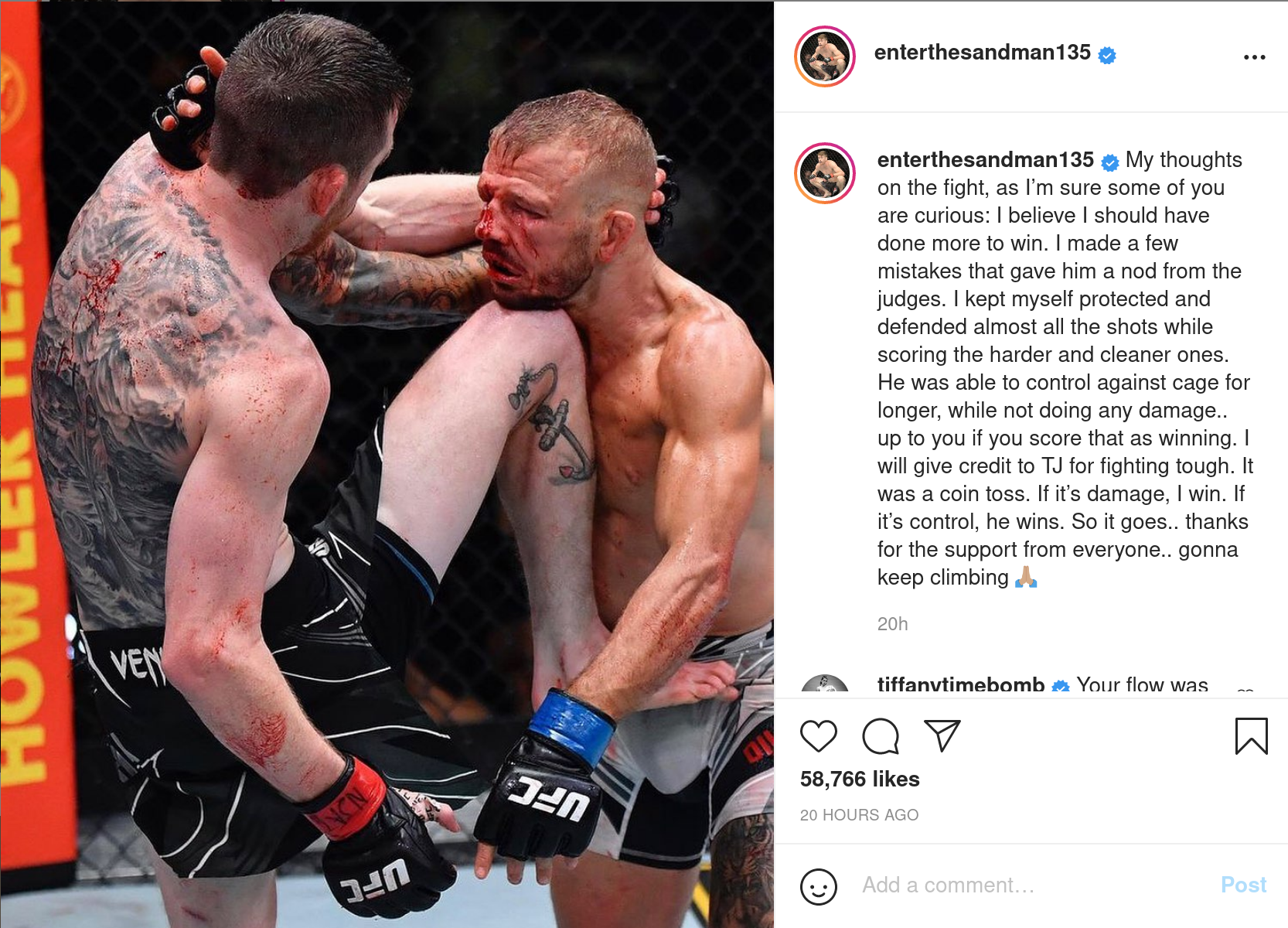 jayrebb said:
Stand and stall and cage pressing is making a big comeback this year I noticed,

If you're an OG viewer here you guys might remember the referee crackdown on stand-and-stall that happened during the golden age. Rogan would bitch about it and the UFC and refs finally all started to break up stand and stall action quickly.

Now it's full circle again and feels like stand and stall is back with a vengeance. It's really the most garbage strategy.
Click to expand...

Well, the problem is that judges are rewarding it. I will never understand the obsession with "control" in MMA.

That's a classy post. A+
Reactions: Tmac, Ameraves and Bruuce

Bring back the Pride-style tournaments for the Olympics. Let's really see who is the best, right here, right now.
Reactions: Erronius and Goatface

Dillashaw re-enters the BW ranking at #2

Yan/Sterling should be held in Denver 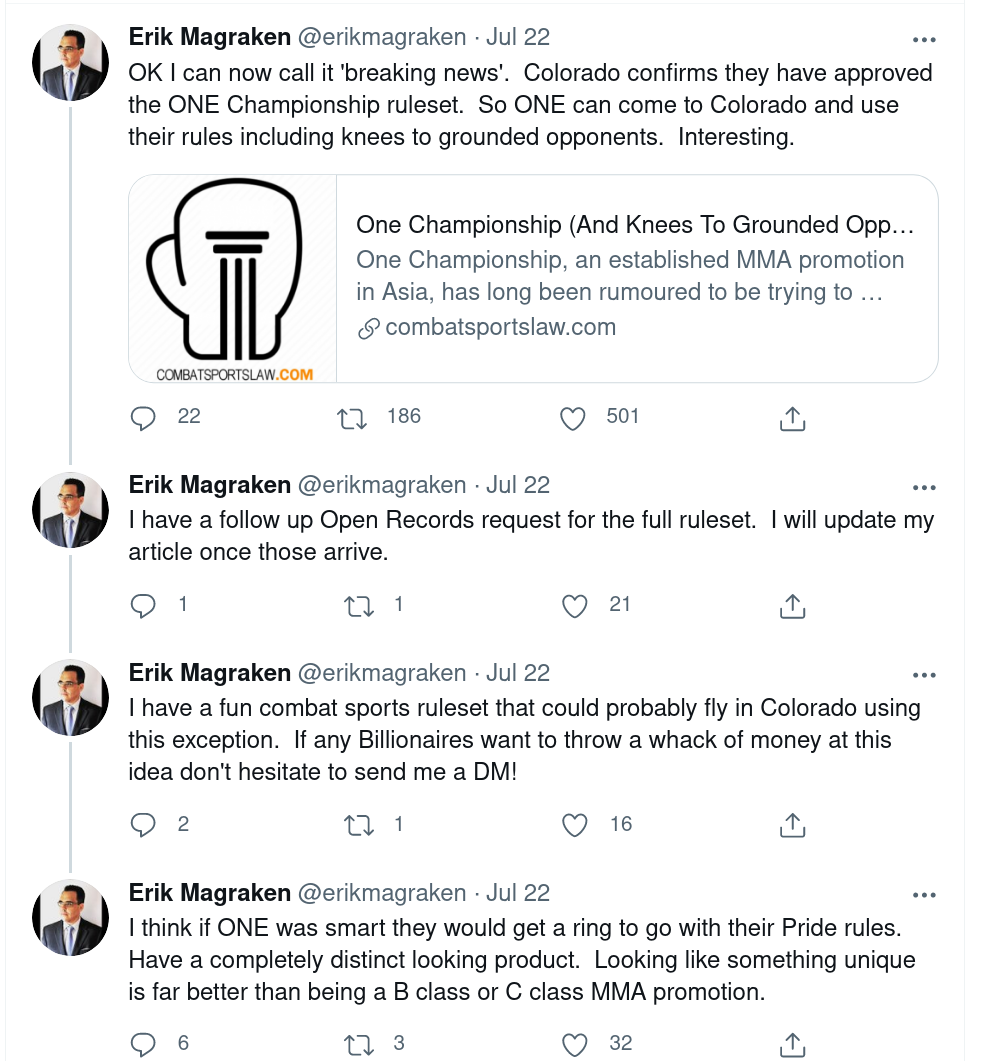 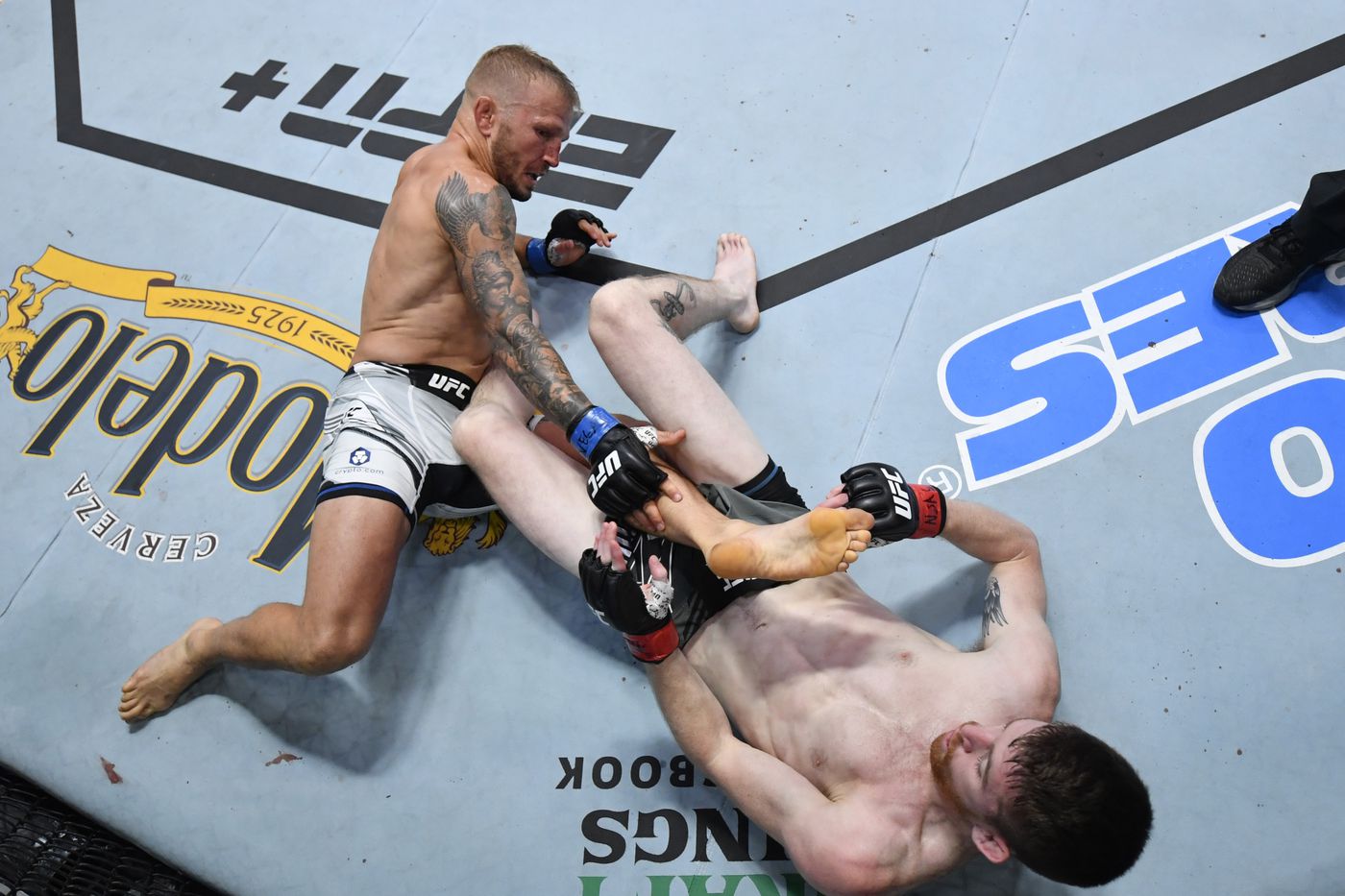 Yan/Sterling should be held in Denver

For real. Its time to bring back the ring.

People can get stand-and-stall and bearfucking from the UFC brand-- we don't need a redundant product.

ONE should go ring only in the US, and keep the cage internationally on TV in Singapore during the trial period. And like Pride, you allow wrestlers to wear wrestling shoes to balance out the ring disadvantage.

They should allow Gi's too. I remember the couple Gi choke's Yoshida pulled off in Pride. lol

The cage is an integral piece of the UFC brand. There is ZERO chance they ever get rid of it. Not unless the company itself fails and reorganizes under a new name or something.

As far as the cage itself, there are pros and cons just like anything else in life. I hate stalling and cage fucking just as much as anyone, so Im not advocating for that type of "entertainment", but the cage does create certain dynamics that would never develop in a ring.

In a ring a fighter can retreat to the ropes in order to reset. Floyd was a master at this, as he never STAYED on the ropes, but would give ground to his opponent if they were being overly aggressive and then pivot off of the ropes and end up right back in the middle of the canvas, once again in control. This is called ring generalship, and there is none of that in the octagon. Yeah, fighters can get on their bike in the cage, but there is really nowhere to go. Every time someone tries that back-off retreat into an escape they end up giving up their back.

The cage passively forces guys to kind of draw a line in the sand and bang. The only way to avoid that is grappling and wrestling. Which brings me to my final point, a ring will fuck wrestlers and grapplers and strikers will inevitably begin to have an advantage and every champion will be a striker. Wrestling shoes will somewhat help negate that, but overall its just too much to mitigate through accessories and planning. 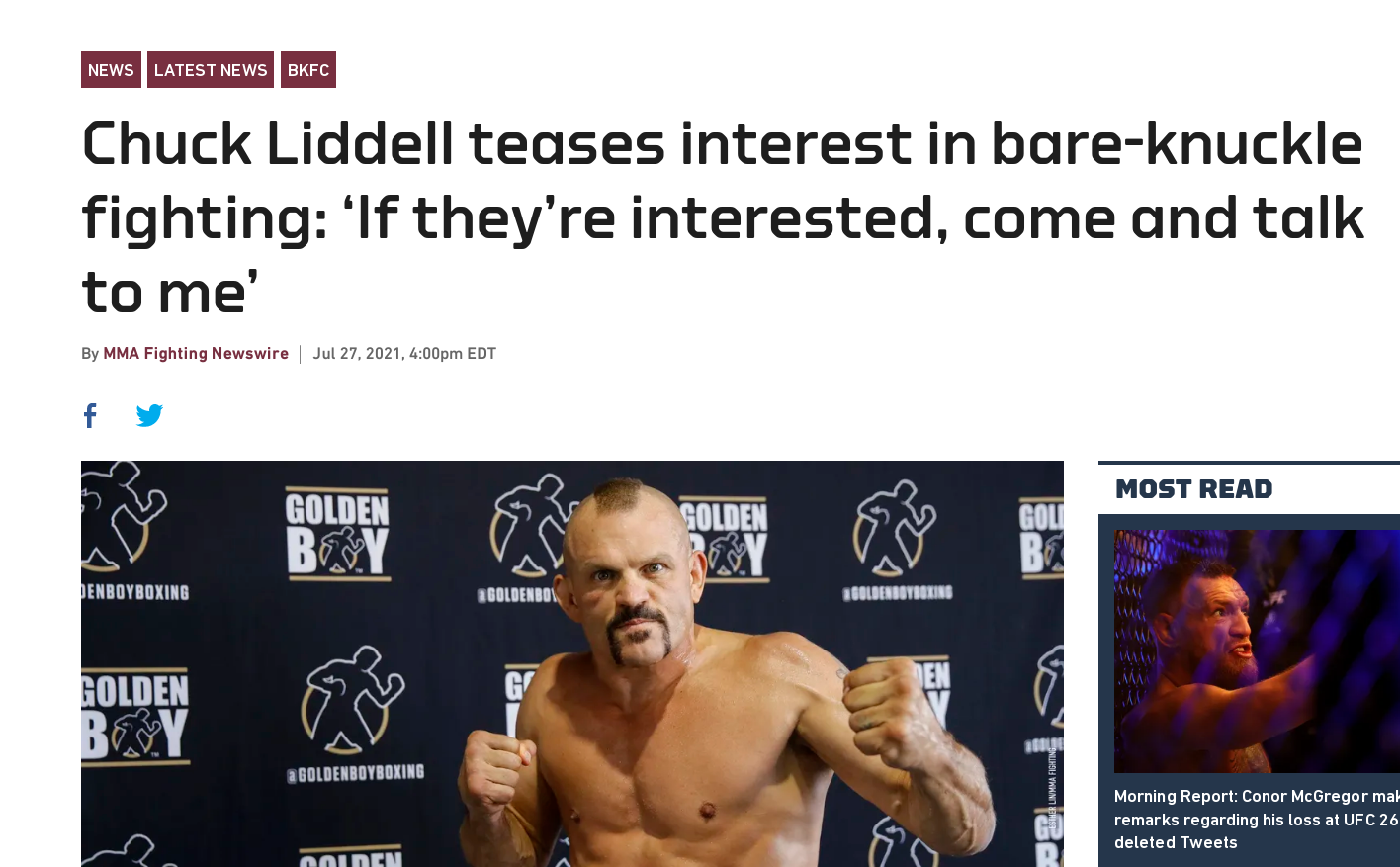 "Went in for a MRI today, found out that I suffered a displaced Bucket Handle tear of the Lateral Meniscus"

Good luck to him; he'll be out at least 9 months unless he really rolls the dice on letting it heal properly.

This is the exact injury I had (in both knees, FML). On my right the repair ended up failing 18 months post-op and now I have the options of removing my lateral meniscus entirely and getting a knee replacement in 10 years or living with mild daily pain and the inability to participate in athletics because I can't flex more than 90 degrees under load without tearing out the surgical anchors. I chose the latter. I miss training, but I don't need a knee replacement in my 40's.
Last edited: Jul 28, 2021

He can barely form a sentence as it is.

I miss watching elite strikers cut people off in the ring. Pride had some great showcases.

K1 at the time much the same. Real artwork.

You can't get your ring fix from Glory as much anymore, because everyone in Glory is a nasty kickboxer with brawler skillset. The elite flashy strikes of K1 days are pretty absent from Glory. I'll still check Glory highligts, but it's not MUST WATCH like K1 in it's prime.

When someone does something flashy in Glory, it's got some bar room brawl aspect to it even if its really good technical strike. So many Glory fighters rely on heavy connection and power due to how they're built and train now. I miss the K1 snipers, the sniping big counter lefts, the sniper flying knees, the sniper head kicks. And the physiques. It was all supernatural, and felt like much more of a spectacle.
Reactions: Armadon
C

jayrebb said:
I miss the physiques.
Click to expand...

You and my wife should start a club.

I mean it's like Attitude Era WWE versus modern WWE. Vince didn't promote a certain look until he got busted for nothing. It wasn't just about the female viewers but the overall spectacle. K1 felt extraterrestrial like it was taking place in a different galaxy.
Show hidden low quality content
You must log in or register to reply here.
Share:
Share