ronne said:
Right but between the chaos convert from fleshcrafter and the life as ES craft he's getting what, 50% life regen/second from stitched demon?

Unless something can hit him for the actual 70k life or whatever it is he has in literally one hit he'll just always be all full from the regen.
Click to expand...

I thought the conversion from Fleshcrafter would put him in dangerous one-shot territory regardless of regen. Honestly, I'm too big of a pussy to try, finding out it doesn't work would piss me off too much.

AG should have something close to 100k life at gem level 26 or so so even the fleshcrafter convert leaves him with plenty to survive basically anything.

Unsure about the uber bosses though, haven't tried them just yet.

I always wondered do AGs ignore slams and other aoe mechanics of pinnacle bosses?

I've run the super AG several times before, but without Fleshcrafter and they were basically immortal. You'd have to have some massive, MASSIVE degen to kill them. My AG used to wander into Sirus storms and just sit there and you'd watch it go from 100% to 98% hp back and forth. I always used a recover 15% of life every 4 seconds over 1 second Hunter chest with crafted maximum life as ES on it with the Stitched Demon and it was an absolute monster. Fleshcrafter, however, does make it a bit less tanky as it loses a lot of life for extra ES which it can't even regen. My AG without Fleshcrafter was something absurd like 90khp and 40k ES or some shit which made it a God. The Fleshcrafter versions obviously are going to reduce this to almost half which is rough because I've had plenty of 45khp minions get fucking obliterated by bad mob combos in previous leagues and it's probably worse now.

Just checking around seems like a lot of people use Oskarm gloves on their AG for - chaos resist to bring them closer to 0 total Chaos res. That + windscream boots allow you also to put an extra Ass Mark on the mob if your AG hits it. Looks like some people even use a Geoffri's chest for Zealots oath to apply life regen to ES too which doesn't seem to bad except for chaos damage hitting through your AG's ES.

I can confirm AG's definitely don't dodge pinnacle boss moves, they just straight tank them for the most part. A lot of AG's are run on Meat Shield too so it's on you to make sure you're dodging the best you can as well.

Unrelated to anything AG, I did Uber Cortex twice yesterday. Fucking thing has an inherent "monsters take 70% reduced damage" modifier on it. Fucking nuts. My first one also had 80% to all monster resistances. I was pretty spooked going into the fights since you fight two bosses at once each time, but their HP doesn't seem to be scaled up at all beyond the lvl 85 modifiers inherently. They pretty much got burst down and I just leap slammed around the arena clenching my ass why my totems went to town. Died once because I literally though the bosses were dead and one of the Synthete dudes flew down from the fucking heavens and blasted me. Second run was deathless and had 0 defensive modifiers for the mobs so they melted even easier. They did have 700% increased crit chance and 30% crit multiplier though which could have been nasty. Loot was shit, all 6 of the tri-implicit items were awful. Two Nebulis with low tier implicits. Luckily I found both maps so it was all a net gain.

Probably going to try Uber Exarch again, but looking at the "rewards" for it it's more of an ego thing than anything. Wish it had increased drop rates of the good shit, but that node is right below the Uber node so why even bother. I'd rather blast an 80 quant normal one I can insta kill than dance around like an asshole for 6 minutes and lose 30% of my level for essentially the same rewards.

I tries Uber sirus. I was not prepared.

Uber Sirus is probably the hardest out of all of them heh. Unless you're a dot or minion build you DPS uptime against him is abysmal, and with his ground degen being permanent he basically has a rage timer cause you'll eventually just have nowhere to stand.

I just looked at my AG, level 27 from combined bonuses he has 83k life, he could go to 105k if I had a +3 hat and a level 21 gem. He ain't dying to anything I can think of in maps, maybe something in one of the ubers could get him? Eating full uber uber shaper balls or something might be enough? But even then with his 50k regen it's hard to imagine would could do enough damage fast enough.

Are they still going to do poe2 or what?
Reactions: Brikker

Haggle midget being a super bro this league

Okay I think I might actually be rich this time, wtf recombobulators: 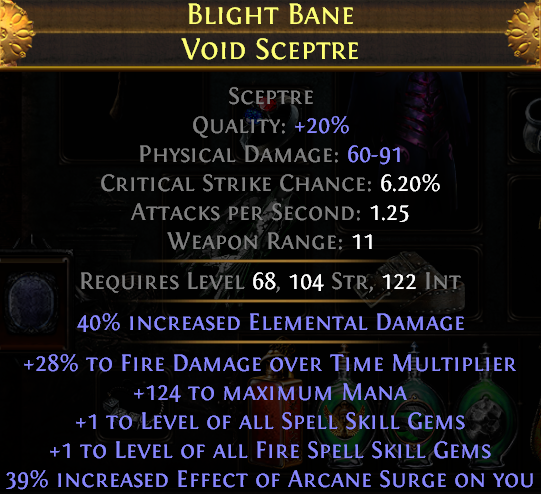 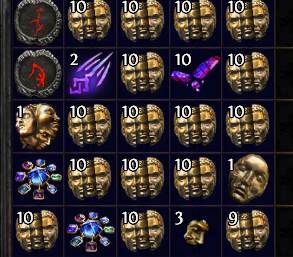 From ol' Tujen with about 30 exotic coinage. Not too shabby. Expedition not specced, but I definitely didn't turn it off.

ronne said:
Okay I think I might actually be rich this time, wtf recombobulators:

I'm guessing the arcane surge roll has a caster tag?
If so you could try to gamble, cause it could remove fire dot but caster tags would be safe, and craft "cannot roll caster modifiers" to annul the mana whitout risking the +1 gems.

Thregin said:
I'm guessing the arcane surge roll has a caster tag?
If so you could try to gamble, cause it could remove fire dot but caster tags would be safe, and craft "cannot roll caster modifiers" to annul the mana whitout risking the +1 gems.
Click to expand...

It does not unfortunately, the only tag it has is "sentinel" heh.

Honestly after all the changes to arcane surge I'm not even sure how valuable a mod like that is anymore.
Reactions: Thregin

Made it to wave 28 in simulacrum and AG never even looked to take damage. If that can't kill him I don't know what will.

Path of Exile is a free online-only action RPG under development by Grinding Gear Games in New Zealand. 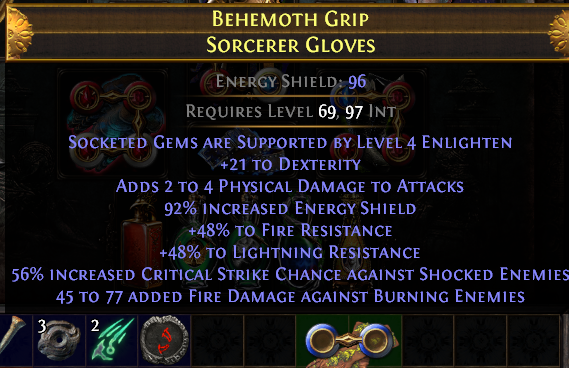 Just one of those leagues.
Reactions: chthonic-anemos, Lightning Lord Rule and Aevian

So far I've failed on Uber Cortex and Uber Sirus. I think I might be able to get both if I just stay alive until last phase. Also I might not want to Maven empower my Uber Cortex. I can't tell if the void zones are left by him or Maven. Essentially that was what was killing me when trying to dodge the 360 attacks.

Switched Corrupting Fever Poet's Pen Champion. Enjoying it much more than Skeleton Mages. Especially in price despite both builds being meta.

I can't figure out why it's popular to have Reap and Exsanguinate in the Poet's Pen. Wouldn't you need to attack 6 times over the duration of the Exsanguinate in order to maintain 3 stacks?

I think i got pretty lucky

Dropped 2 in 5 invites, 2 ubers, 3 reg. Got 1 from each kind and had one i bought earlier.
Reactions: chthonic-anemos and Lightning Lord Rule