Ridas said:
My Flame golem build made it to T16 and it is doable, but slower than good builds. Now I dread all the bosses and probably quit, when my dps isn't high enough. But my autism is satisfied.

Also no good guides means I was winging it and in good PoE fashion my build probably has a shitton of room to improve. But fuck it. Job done.
Click to expand...

Yeah I get that itch every so often. Did a wardloop which was super fun but, not high end viable due to the low tank. I'll pick it up again next league, looking at ek elementalist or occultist dot build. Also saw accuracy stacking jugg, for 70mil dps and untouchable tank, but looked expensive.

Anything with Doryani's Prototype is expensive this league. Also, wouldn't be surprised if that gets a lame hard cap. Taskmaster Shield and Tempered By War negates the only downside it had left.

If you're just referring to 1k accuracy jewelry....those probably won't exist next league. It seems unlikely Kalandra goes core. It certainly has some interesting theorycrafting potential and bugs(never seen mark_ggg post this much), but it's boring, needs a heavy balance pass, and has 3.19 baggage.


Kinda surprised ward loop didn't get nerfed. Maybe the inherent clunk and tanky until it's quite abruptly not puts a limit on it.

Ward Loop got a straight 21% reduction in damage on the CWDT gems this patch, but it just made it so you need 50 divs to melt bosses instantly instead of 10 divs. And at 300 Divs or whatever you just erase Ubers before they do anything for the most part.

The buff to Ward actually didn't do anything for Ward Loopers, but I wonder if anyone gave a shit if an evasion build could ACTUALLY benefit using 2-3 pieces of ward now with the 3 second recharge. Pretty easy to hit absurd evasion numbers so it could help mitigate a big hit every now and again.

I meant from a just existing standpoint. Permanent ward is obviously counter to its core design function. Ward can never be that large because of loopers. Also, you can't have too many things that fuck with flask charges, like Droughtbringer being akin to old reflect rares.

Honestly, would have rather they kill that build than the Olroth's boots build.
Reactions: Lightning Lord Rule and Kythik
K

Found a couple good cards and walked away with 15d playing for a bit, richest I've ever been. As I shelve chars when they hit standard, any fun builds y'all can think of that you could kit out with that and be fun to play? Other than cyclone and summoner I haven't played many

Uriel said:
I'm already done with the season but Quin has carried the content creation for me this time for sure

Quin is worse for this game than Archnemesis.
Reactions: Slaanesh69, Kythik and Lightning Lord Rule

Deathwing said:
Quin is worse for this game than Archnemesis.
Click to expand...

He's something, that's for sure. Watching Mathil shoutcast his Uber fights is always fun. I actually watch his alt channel sometimes when Mathil/Steelmage/Lily are offline because he just grinds and thinks out loud on mechanics but without the sperg screaming and try hard laff donos. It is impressive he basically makes these near unkillable characters in SSFHC, but the man probably plays the game more than any other streamer all combined right now, even more than Mathil who is doing 6-8 hours every day.

He's got "decent" game knowledge passed the average player but he has the spergy screamy "entertainer" persona kids love so it's just a $$$ idea. I'd rather have some one a little more stoic and tempered, but every once and a while it's good content in small, small doses.

Wait, you watch Lily streaming? Her youtube videos inflict narcolepsy. Which is a shame because her thumbnails are funny.

Alright the staff crafting project is finally over. I am very poor now but plan on riding this to many uber kills: 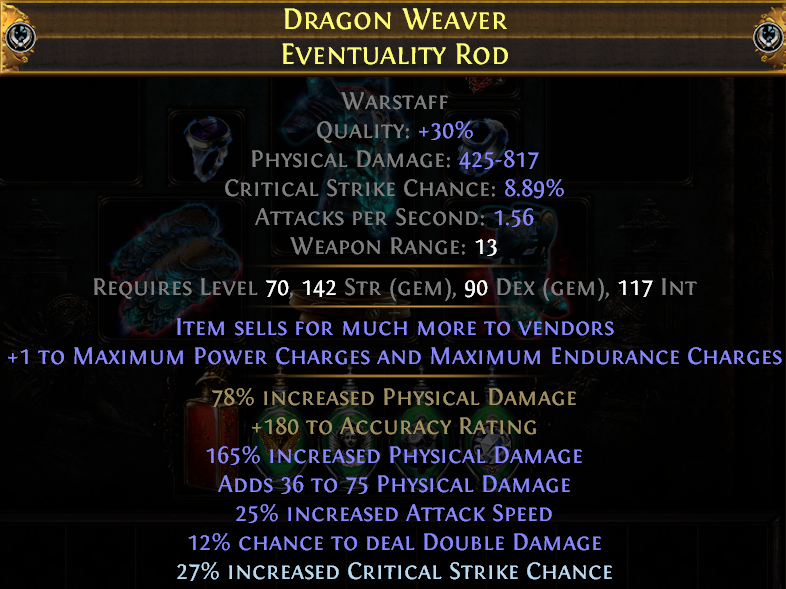 I watch her sometimes depending on her music honestly. She has a super wide range and I hate like 35% of it, 35% I enjoy and 35% is just whatever. I'll listen to her just grind shit in the background mostly. She's literally Galkaizer with the weird ticks and phrases and shit which can be annoying, but mechanically she's really good. I'll watch her kill like 40 bosses in SSF or HC trade in a row to try to get ashes and shit. She plays incredibly meta builds though so that's 100% snoozefest for the most part. And she does classic HC shit like grind T1 maps until she's 85 and then move up to unrolled Tier 8's until she's like 93.

Steelmage is good, but he's a PoB warrior. He's damn good at it, but it's a symtpom of being a HC player. He has to make sure everything works in simulation before he even attempts it or he could waste all his time and effort near instantly. Once he gets shit up and running though he's a great tech player. I prefer the SC Mathil style of a base and then a bunch of figuring it out on the fly.

I watched Zizaran a lot too, but he talks nonstop, which is what you're supposed to do to entertain as a streamer, but I just hear him tell the same self aggrandizing stories about his life over and over and over again and it gets a bit hard to handle. He's good to watch early league if he's not mega raging because he is a good pusher like Steel.

Now...how fun was the whole thing? Rate it on a scale of 1 to 10, 1 being six linking a shitty chest after 3k+ fusings, and 10 being exalt slamming the exact mod you wanted with your eyes closed.

Yeah and how big was the money pool to start.

Crafting is fun for shit like that if you've got 50 divines to dump into it and then you hit it in like 11. Otherwise it's a kick in the dick. This league is wild though. Spent 1600 fusings failing to 6link a chest. Bought another 1360 for 1 divine (WHAT) failed the next 900. Then I bought 1300 more for 1 divine (insane) and just 1500 fusings reciped it. First time I've ever, EVER used that shit. This economy is bonkers. Bought an awakener orb for 75c too. Weird fucking prices. Usually Awakener's orbs are +/- 30% of a divine, not 1/3 of a divine.

Total cost ended up being about 50 divines I think?

Most expensive part was fracturing the base. The only fractured bases that existed were already crafted with mid-tier phys rolls and people wanted 30-40 divines for them and most were pretty meh tier2 hybrid rolls so figured I'd do it myself. Getting the staves themselves wasn't so bad cause they roll pretty decently out of the heist rooms, but it took me 4 tries to hit the fracture on dictators, and those were like 7 or 8 divines per try or whatever it comes out to buying the juice. I did get to "save" some money here as I had 4 oshabi thingers from doing harvest all league.

From there it was essence spam until I hit either a good phys roll or a good attack speed/crit setup and just craft phys and call it good enough. Wound up hitting tyrannical about uh, 350ish tries in? Luckily had an open suffix so prefixes can't be changed > reforge speed at that point. Took 3 tries there to hit t2 attack speed, then craft prefixes can't change again and aisling it for the 50/50 and hit double damage and craft crit.

Deathwing said:
Now...how fun was the whole thing? Rate it on a scale of 1 to 10, 1 being six linking a shitty chest after 3k+ fusings, and 10 being exalt slamming the exact mod you wanted with your eyes closed.

Boneshatter jugg. Quin actually made me a believer in the armor stack plan to not get absolutely fucked by elemental damage. My ideal setup in PoB should be able to run around comfortably at about 60k armor with ~77 max res, and still maintain 20-30m dps.

Some stuff is so cheap right now cause phys builds aren't very popular, like blitz charge forbidden jewels are 5 divines for the pair, an impale watchers is 50c, +1 endurance charge synth rings are like 2 divines etc, so I threw the bulk of my cash at making the staff.

Like 5-6m walking around dps, no flasks/totem/berserk or whatever, and the DPS window damage for bosses should be pushing 30m with everything up:

They've ruined their economy this league, I don't think I'll play again if they continue with this reward model of printing currency for only 1 playstyle (MF, group especially). I know a lot of people didn't like it in past leagues, but at least group MF was adding items to the economy instead of inflating currency now. 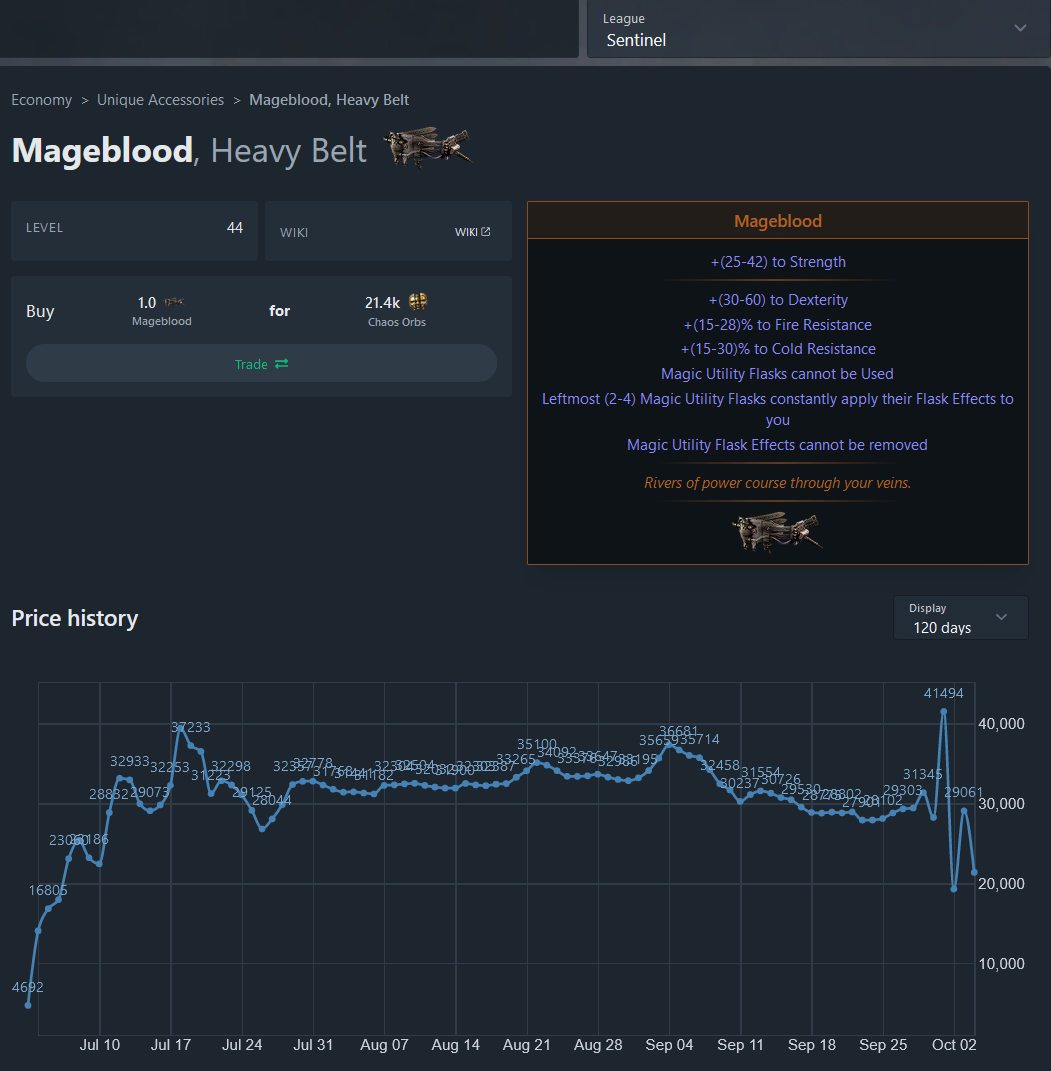 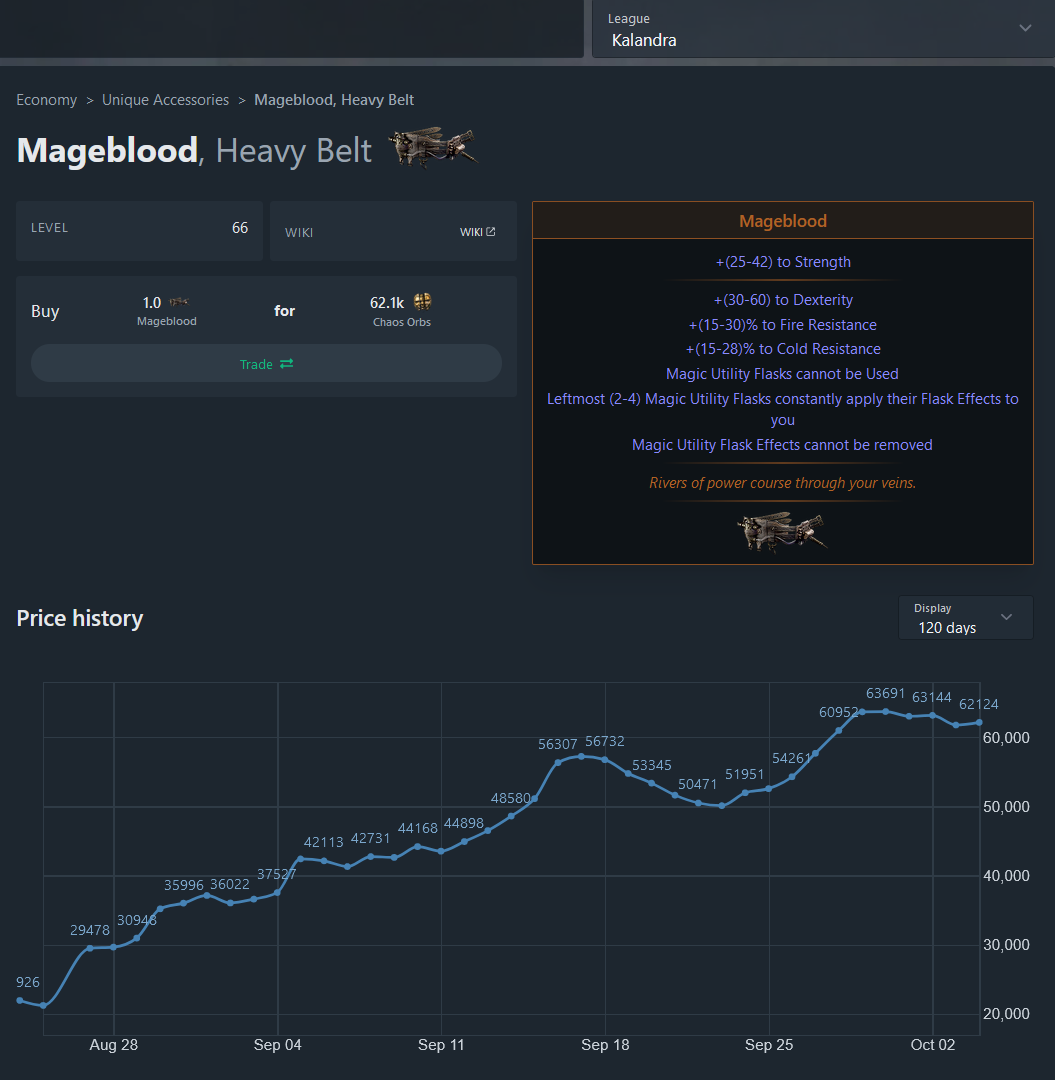 Inflation is out of control, this is a buff.

It's not inflation lol. It's the colossal nerf to group play and map/alva/deli juicing.

Magebloods and headhunters etc were only ever as "cheap" as they were because the organized farm parties could print them like crazy.

You're just seeing the price reflect their actual rarity now. The individual goombas farming ability is actually way, way better off currently when you're looking at buying normie gear.

ronne said:
Boneshatter jugg. Quin actually made me a believer in the armor stack plan to not get absolutely fucked by elemental damage. My ideal setup in PoB should be able to run around comfortably at about 60k armor with ~77 max res, and still maintain 20-30m dps.

Some stuff is so cheap right now cause phys builds aren't very popular, like blitz charge forbidden jewels are 5 divines for the pair, an impale watchers is 50c, +1 endurance charge synth rings are like 2 divines etc, so I threw the bulk of my cash at making the staff.

Like 5-6m walking around dps, no flasks/totem/berserk or whatever, and the DPS window damage for bosses should be pushing 30m with everything up:

Looks similar to Transcendence Loreweave. I think you did the popular berserker version last league and ended up investing far more than I ever did. How does it compare? My budget version felt squishy, especially when flasks fell off.

Speaking of flasks, why Flagellants instead of charge on crit?

How is the clear on Boneshatter? Especially without much investment in stun. I could never get the clear to feel consistent to point where you know you're going to one-tap a pack. The stuns just didn't seem to prolif reliably.

How quick does Vengeance build rage?

Time to blast lab 50 times on a good day to get Determination or Pride res so you can slap War banner on and get 15% more dps baby!
Show hidden low quality content
You must log in or register to reply here.
Share:
Share