It's good. Not necessarily because of the league mechanic, but there's some neat skills and item changes. The league mechanic is kinda meh, but allows for some pretty sick items to be made with just complete luck.

The first couple of weeks were horribad but it's good now. It's real good.

I think the most noticable change is the change to loot drops.
It's kind of fun while its still novel getting a stack of divines but in the long run the loot goblin meta is going to need a change. IMO

Currently though, Reliquary scarabs are BiS (combined with juice that gives you more rares, like legion for example).
Reason being uniques are intrinsically "rare", so when you find a "god-touched" rare mob that converts items to currency those extra uniques turn into good currency stuff.

Here's a long ass highlight of my bossing (all non Uber) and shit with skelly mages. Can just skip around to bosses. Few examples of omega DPS are Elder, Shaper Final Phase, Drox, and Searing Exarch (though I never insta phase him).


This is kind of an example of the "nerf" mentality. People read the 50% added damage removal from skeleton mages and they just didn't bother working with it. 5% of players in the week 4 snapshot from Sentinel had skelly mages. This league it's 0.4% at the same marker. They got nerfed, but because of overall BALANCE with more crit/crit multi available for minions it comes out to the same or even better in absolutely min/max situations. Shit like that just drives me bonkers people see "reduced" or "less" in patch notes and think OH THEY DESTROYED THAT BUILD. No, they just brought it in line or made you invest for it. Take Ward Loopers. They got something like a 25% total nerf. They still fuck major ass, but because of the patch notes it took a few weeks for people to try it out and go "Oh shit this still does 50m dps with me doing nothing!"

People like Captain Lance and Mathil are invaluable because all the build diversity people have no fucking clue what they're talking about and these guys actually EXPLORE the games mechanics and bring life to long thought "dead" skills. Some shit was never even dead but a -#% nerf meant it was not quite as good as Meta Skill X so no one bothers. I guess it's partly GGG's fault making the game so convoluted and complicated to engage in experimentation, but fuck if it's not rewarding when it works.

I think the biggest problem with this game is casuals and the Reddit-GGG disconnect is because GGG knows that. To cater to a true casual player base they'd have to dumb down SO many systems that it would just absolutely gut their game. I suppose that's what PoE2 is going to be, a sort of relaunch so that people who are too intimidated to start won't have as many overbearing systems to learn and can jump right in. That's why GGG mostly doesn't give a fuck about the 2 weeks numbers because that's all the people trying the game out or whatever who are very casual and quit in high numbers whether the game is amazing or not. Until PoE2 comes out it's just NOT a new gamer friendly game which is unfortunately because it IS one of the best, and hands fucking DOWN the best ARPG of all time, but if GGG never makes way for new blood to come in it's just going to dwindle it's player base lower and lower until it's fucking P99 of ARPGs.

The minion fags whining about nerfs is music to my ears. Holy fuck please tell me more about how unfair it is that you have to worry about itemization now or actually re-summon your minions sometimes.

Meanwhile this random nobody dude has a like 20m bleed DPS reaper on an immortal juggernaut and can facetank every uber with ease:

Yeah I'm a big minion guy and I'm 100% behind them making you work your gear/tree but making it worth it. The last 6 years of just having rares with life and resists, maybe, was just dumb. That said Minion builds are often more technical than 90% of builds so even though they pretarget on actual fights you've got more APM than probably any other class. It's braindead for clear, but for single target engagements they're often the most stressful and me having 0 traditional defenses makes it even more intense, but I accept that.

Resummoning spectres midfight is basically impossible and annoying even in your hideout. The mana cost on most minion skills has anti synergy with aura reservation, making resummoning those midfight a nontriviality. AGs, at some level of investment, should never need to be resummoned. Even if they dropped their items on death, imagine having to pick that shit up while Sirus teleports your ass into a meteor maze.

Minion players are a bunch of bitches, but their are some legit issues with having to resummon minions.

Boss damage has never been the reaper's issue. Clear is hobbled by idiot AI and poor skill design. You can see many points in the video where the player is clearly just waiting for the reaper to catch up. Obviously, he can tank the hits while waiting, but that "I know what you should be doing but you're not doing it" feeling would get annoying very fast.
Reactions: TJT

I've kinda been picking skele mages back up and it's hard to tell what the nerf even was. The quality of life on that skill is just so high.

If anyone is still enough of a masochist to care about playing attack builds then helix raider is still pretty good. Don't even think about doing ubers with it, but there's enough damage there to do all the normal content and it clears better than you'd expect with the Maven boots on and how absurdly fast it is:

I'm a fucking queer and am getting the itch to play this.

Last played during Metamorph, is there a good video to watch about all the new mechanics I need to worry about? Or can I just ignore everything but the leagues'?

Also, my 2nd biggest pet peeve about PoE is how goddamn many 3rd party programs you need to facilitate trade in this dog shit game. Is that still the case? How is SSF these days?

Um, I'd say the biggest changes to power besides some of the crazy items they've added is the new bases from eater/exarch are pretty powerful, you can craft some great gear from those (or just buy it for under 5c)

And also Atlas passives are huge. Look hear to see multiple ways on how to progress it, but basically you'll know the content you like and just spec into it. Or find a strategy that looks fun.


SSF sucks but there are some people on this forum that still bash their balls in it. Small leagues are better but you gotta find good groups of people.

As for all the new mechanics for all the leagues they've added since metamorph, uhh just look at this cheat sheet I guess.

Also don't go melee attack builds if you are looking to not play on hard mode unless said skill is Lightning Strike.
Reactions: Kirun
B

Kirun said:
I'm a fucking queer and am getting the itch to play this.

Last played during Metamorph, is there a good video to watch about all the new mechanics I need to worry about? Or can I just ignore everything but the leagues'?

Also, my 2nd biggest pet peeve about PoE is how goddamn many 3rd party programs you need to facilitate trade in this dog shit game. Is that still the case? How is SSF these days?
Click to expand...

I use the official trade site for buying and awakened poe trade for pricing stuff I want to sell. There are enchants for flasks now if you don't want to use auto hot key. There are tools like exilence but they not really required.
Reactions: Kirun

In an almost decent spot, after one of the worst starts in many years. The actual Lake of Kalandra events may almost be worth doing now, and Archnemesis mobs are close to being tuned but still a horrible implementation for loot acquisition.

Does that sum it up?
Reactions: Lightning Lord Rule

this go to any builds?

Is there a way in PoB to test out different spectre pets for overall effect? Picked up frenzy/power charge gorilla but can't really figure out a good third. Last time I played with spectre's, the ideal was 4-5 kitava things with GMP and picking up loot

k^M said:
Is there a way in PoB to test out different spectre pets for overall effect? Picked up frenzy/power charge gorilla but can't really figure out a good third. Last time I played with spectre's, the ideal was 4-5 kitava things with GMP and picking up loot
Click to expand... 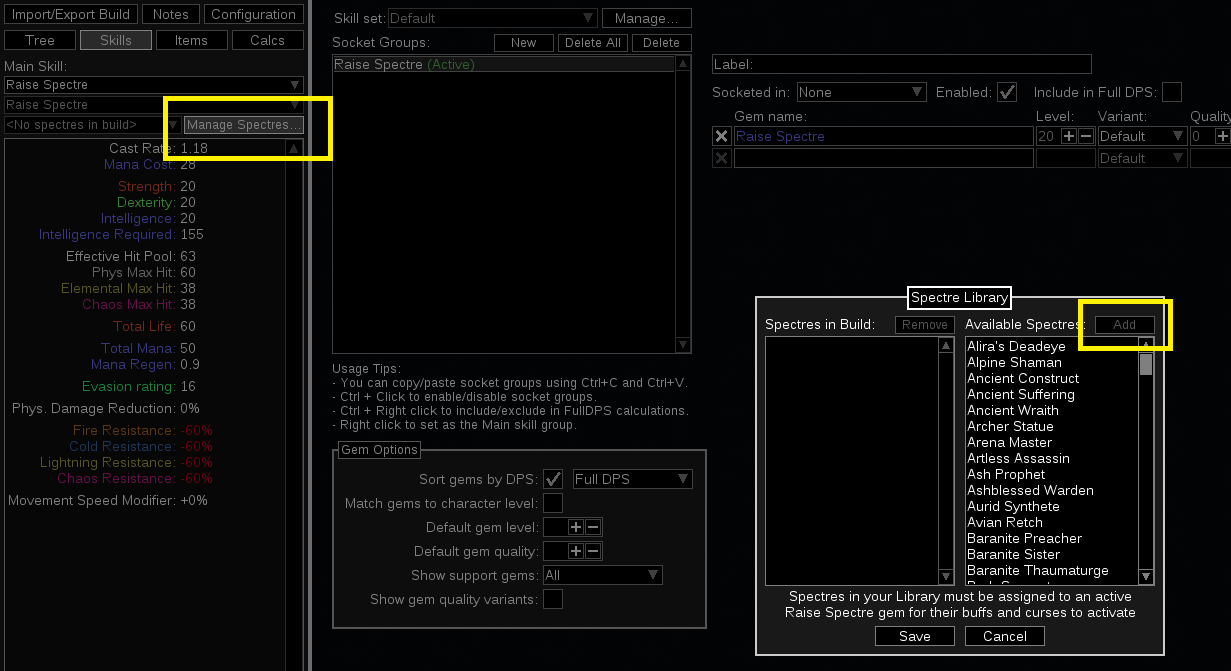 It's not an exhaustive list so if you're deep diving on spectres you might have to use PoEDB, Path of Exile Wiki. You can add custom modifers under Configuration also if you know a spectre just does X.
K

Nice! Thanks for that 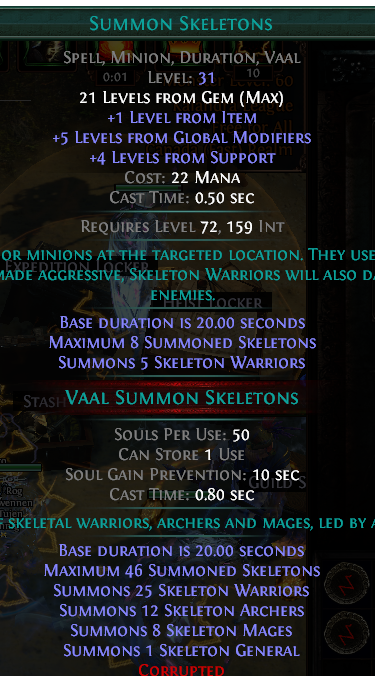 And people get mad about balance. I think it's fucking required.
K

Lake is laughably easy with those, compared to an RF build its night and day safety. Kinda silly really
Show hidden low quality content
You must log in or register to reply here.
Share:
Share