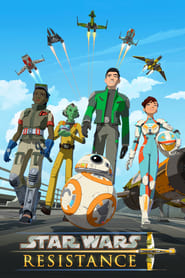 Overview: Star Wars Resistance is an upcoming new animated adventure series about Kazuda Xiono, a young pilot recruited by the Resistance and tasked with a top-secret mission to spy on the growing threat of the First Order. It will premiere this fall on Disney Channel in the U.S. and thereafter, on Disney XD and around the world.
Reactions: chthonic-anemos, khorum and Harshaw

Qhue that poster was one I uploaded because there isn't one out yet. I care that much about making sure your post looks good!!

So does this mean it's only one season? Thanks to TLJ we know everybody dies within a year.

Someone watch them and tell us how horrible they are.

The force is white

First 4 eps are out, got them but haven't watched them yet. Trying to decide which is going to be more of a kick in the nuts, this or TWD.

Here's the thing that doesn't make sense, how in the hell are you suppose to make a cartoon version of the Cold War? Because that is what happened between the First Order and the New Republic/Resistence. I mean sure there's the spying element but this ain't no 007, also there's politics involved in these situations, I'm pretty sure kids don't want to watch a cartoon about politics.

My guess is that this show will probably have an identity crisis, does it want to be a racer show? Does it want to be a spy thriller or a political thriller? Compare to the Clone Wars where that had both war and politics and Rebels was about the early stages of the rebellion.

Its even more kid oriented than Rebels was at the start. It was enjoyable but there's a lot of room for growth and development.

edit : I don't see where this is going, where with Rebels I had a pretty okay idea from the first 2 or 3 episodes. I'm finding the animation style hard to get used to. But having said all that, I like the potential of this to fill in some good First Order and Resistance backstory.
Last edited: Oct 8, 2018

Hardcore Star Wars fans already know a good bit of the Resistance / First Order backstory, but this is clearly going to expose more people to it as well as flesh out the details.

If you have followed along carefully you already know that the Resistance are seen as extremist nut jobs who refuse to let go of the war, but this brings that plot point front in center with a hero whose father is a member of the New Republic Senate.

Certainly has more kid-friendly humor elements especially with the all-too-literal misunderstanding comedy relief, but we also get a nice view into the broader Star Wars culture post-war which was sorely needed.
Reactions: Conefed

So this show is a slow burn... like REALLY slow. They are starting to sort of get to a bigger plot involving the First Order but its taking ages. I keep thinking they didn't hire a story editor as each week seems to be the same basic plot of Kaz failing to fix something and having to go get a part that leads to wacky adventures.

More than anythiing I want someone to create a version of this with subtitles for BB8. He has to be constantly saying things like 'Why did Poe leave me with this moron..."

They've been posting shorts during the winter break which are pretty decent:

Malakriss said:
So does this mean it's only one season? Thanks to TLJ we know everybody dies within a year.
Click to expand...

What do you mean? Who from this cartoon dies in TLJ?

Overall, it's reminding me of the beginning of rebels but I like the animation style better for this show. Stupid premise, but I like that there are no jedi. It's not that I dislike jedi, I've just always enjoyed the star wars stories without jedi more. I hope they don't make kaz a force sensitive.

It takes a lot of inspiration from DS9 in that we spend the whole season really getting to know the various odd ball characters that inhabit the station while also acting as a prequel to TFA.


the Collosus has a hyperdrive. Much like Stargate Atlantis it's not just a station, it's actually a very large ship. Seems clear that it's setting up the Collosus to be a Resistance base after the events of TLJ with the Aces making up the fighter wing.
Now the burn was perhaps a bit too slow as they could easily had gotten here without quite so many goody Kaz episodes, but the show is still aimed at younger kids and getting a new generation interested in Star Wars so I'm sure that changed the dramatic calculus a bit .

Speaking of younger kids they continue to do stuff like this to drum up interest in the grandchildren of the original fans :

Two year run is over. One of the main SW apologists reporting in. That show brought absolutely nothing to the table that mattered one bit. Absolutely worthless story wise and lore wise. Looking forward to the Rebels sequel coming Winter 2020 though, majorly.
Reactions: Conefed

Miguex said:
Two year run is over. One of the main SW apologists reporting in. That show brought absolutely nothing to the table that mattered one bit. Absolutely worthless story wise and lore wise. Looking forward to the Rebels sequel coming Winter 2020 though, majorly.
Click to expand...

Shit don't even have to wait that long, Clone Wars is next month

You could tell they had to push the abort button on a lot of stuff they wanted to do. There are hints of things all over the place but they tried to summer too long and the fire just went out.

Ultimately the show is just a weird little offshoot that has no relevance to anything other than some digital models of the Aces ships appearing in Rise of Skywalker.
TV show information provided by The Movie Database
Show hidden low quality content
You must log in or register to reply here.