hodj said:
They're doing rolling restarts on all classic realms starting basically now going for an hour. If you've had trouble getting in next little bit will be a good shot to get in and stay in
Click to expand...

They should be doing this every day to kick the peeps that are there AFK 24/7 so timmy can play his 2 hours every night.
Reactions: Dioblaire, Denjoy and hodj

mkopec said:
They should be doing this every day to kick the peeps that are there AFK 24/7 so timmy can play his 2 hours every night.
Click to expand...

What they should do is increase the number of layers per server by a ton. That's the fix. Stop with the band aids.
Reactions: Koushirou, Dioblaire and yerm

They're not online yet, but the servers are viewable, so nows the time boys.

The only reason to play Classic is 100% nostalgia, in my opinion. The game is solid, and I believe its better as a game than BfA, but all the changes WoW has had over the years were for a reason. People noticed what sucked, and asked for changes. Blizz just went too far in some cases. =)

The one little issue that had made me start thinking "wtf am I doing playing this?" has been the spawn timers / rng quest drops. I've played both Horde (troll shaman) and Alliance (nelf hunter) to lvl12 on Ashkandi (fuck queues). The spawn timers seem to range from 10sec to 10min (with Menelas in Teldrassil being like an hour). Its stupid. Then you have the rng aspect of getting the quest item you needed off the mob. Even more stupid. If I need a tiger skin off a tiger I just killed... why don't I get it? Didn't care for that at release, and still do not care for it now.

I never played a Hunter until Legion, so playing a Hunter in Classic is something of a shock, lol. Have to buy ammo.. wut? Quiver taking up valuable bag space.. wut? I did the taming quests, and I'm guessing each of those pets are only temporary until you get the taming skill by default, since they each disappeared after a time. Funny stuff, not sure I want to deal with that, so back to then shitty horde side for Shaman fun. Money from questing / killing in Teldrassil seems way, way, way better than Horde starter area.

Edit: Speaking of afk. How long can you afk? I left my character online while I was at work, but it was disconnected when I got home. Was there a server restart yesterday between 8am-5pm? Or is there an autokick if you have no way of making the character do something every few minutes?
Reactions: Brikker, Koushirou and Fifey

And they're up low pop on whitemane

Zindan said:
How long can you afk? I left my character online while I was at work, but it was disconnected when I got home.
Click to expand...

.........played a bit this morning. Server goes down for reboot. Step away for an hour. Come back to a 4k queue 91min to login
Reactions: Dioblaire and ShakyJake

Just play bfa guys. You think you don't but you do.
Reactions: Koushirou, Quineloe, Tmac and 7 others

Dom said:
That's what you get for rolling alliance. higher % of morons
Click to expand...

I decided to roll on another server to fuck around due to a 6+hour queue on whitemane. Rolled up a human paly, and gods were there some dumb fucks in chat. And even with all the priests around me, I didn't get a single stamina buff until I was in Hogger's area. As well as less people grouping up to do kill quests.

On our server horde side, I nearly had it my whole time leveling.
Reactions: zombiewizardhawk and hodj

Coleslaw said:
I think before Cata, the Azshara zone had like 1 quest in it?
Click to expand...

I don't really remember, but the wowhead site has a significant number of horde quests in Azshara for Classic.

mkopec said:
I guess im forgetting who the majority of wow audience really is.
Click to expand...

And don’t you forget it

Sulfuras pop is fine so far. 45m queues at peak then none the rest of time. I'll take that over streamer + autist guild servers every time.
Reactions: Araxen

Kill green dragons, they had a ton of good nature resist gear.

Who are you on Sulfuras,

Coleslaw said:
I think before Cata, the Azshara zone had like 1 quest in it? So the revamp was a necessity to some areas.

I think people just missed the non-titangorge gear and talent system. I wouldn't be shocked if we see Blizzard revert a little bit in the next expac to earlier systems from past expansions.
Click to expand...

Nah, there was a bunch of quests in Azshara, but not as many as most zones. Bigger problem was they were spread out and that zone is AIDS for travelling around within.
Reactions: Koushirou and Falstaff

My brother is going to install WoW Classic on his second computer, and log us both in a couple hours before I get off work (hopefully before the East coast gets home). That being said, we are going to play on Benediction (PvP) server. If Whitemane calms down in the future, we might transfer there. 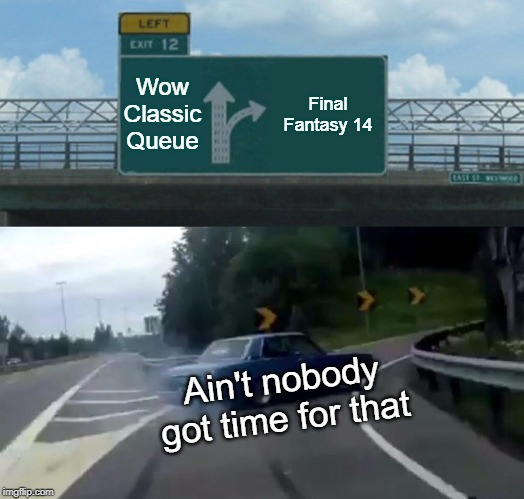