LOL gave it to the charm pet, i would have destroyed mine and reclaimed it later if i won =p but i group with myself so i have plenty of space!

Should have killed the charm pet and let everyone roll on the ods it dropped.

Zaide said:
Should have killed the charm pet and let everyone roll on the ods it dropped.
Click to expand...

That’s what we did and Azmo won it.
Reactions: kinadin, Evernothing, DickTrickle and 1 other person

TLP with guild vs guild would attract any player with an ego.

Let's be honest, EQ isn't a game for the humble; the competition would be A+ prime.

sukik said:
we found three of the worst enchanters I've ever grouped with
Click to expand...

Not surprising. 90% of the enchanters in Agnarr are worthless. Corinav will be no different, because enchanters are the most OP class of the holy trinity so many will be made for ease of finding groups.

mtnhmr You know you can crush your balls in a vice without paying DBG to do it for you, right?
Reactions: HK976 and Needless

Regime said:
That’s what we did and Azmo won it.
Click to expand...

IDK if you read Discord but Lady Elaida has decided to play on Coirnav with Thraka.

Korrupt said:
IDK if you read Discord but Lady Elaida has decided to play on Coirnav with Thraka.
Click to expand...

Elaida will need a cleric from the Third Gate to protect her in the form of healing spells and incantations.

Korrupt said:
IDK if you read Discord but Lady Elaida has decided to play on Coirnav with Thraka.
Click to expand...

Are they going to start a guild over there to stomp Relentless Insomnia?

I think we've got some members who've joined them just because no other open world options have appeared but they might prefer to play with some familiar faces instead.

Wat, people are following thraka? I mean I'd guild with the dude but if he was anywhere near the loot decision or guild bank you'd be nuts to be there. 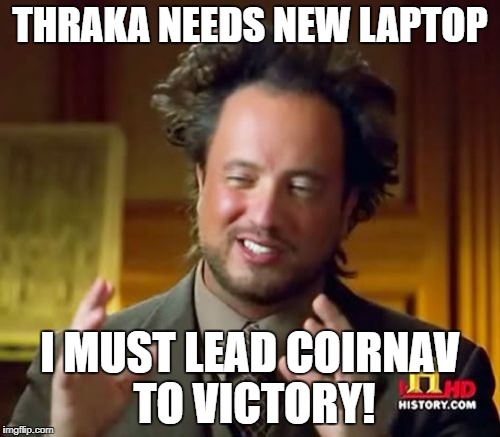 NFC what theyre doing I just saw people making fun of Elaida and him saying he was running with Thraka. He might have poofed with krono but hes still by far one of the best players on these servers, being on his team would always be a smart idea.

Kharzette said:
I think of bad groups as a difficulty level. Easy is a guild group, medium is a typical pug. Hard is 2 smokers, a babysitter, and a couple stoners.
Click to expand...

Call Center Gary - mage - still using level 11 air pet in Estate of Unrest that's double attacking for 11. sits in corner afk at full mana 80percent of time. After a call finishes he comes back to unload half his mana on one mob; usually taking aggro in the process and draining half the clerics mana on divine lights, then takes his next call and afks. He also just happens to be group leader--so you have to spam him 15 times to get anyone new invited.

Chain smoker Shillin - monk - comes back and slams your group with full pop spawns from every spot your camping, named included if up, usually while gary the mage is on call. Afterwards fd's for 10 mins for smoke break; either because you're all fucking dead and it's cr time, or just Gary the mage who came back just in time to overnuke the named and get 3 shot. He doesn't even mind if it's a CR cause he can then get in a 2 for 1 cig break as the lone survivor and FD.

Oxycodone Laurieannestasiah- Enchanter - stay at home mom - just had the most beautiful daugher in the world; coincidentally also adopted a malnourished 3 year old kid from Somalia to virtue signal everyone she ever meets again about her contribution to the world. Her husband is a well-to-do lawyer she won't shut up about... you suspect it's because she gives amazing head--this jealously increases your annoyance with her constant diarrhea of the mouth. As packs of 3-4 mobs are coming in she has to delete 4 paragraphs of text before she can start mezing and/or slowing. Doesn't tab target so runs around the room like chicken with no head trying to mouse target any unmez'd mobs. You asked her to charm pet, but that was two hours and three CR's ago. Just when group seems to stabilize and cleric is oom with one mob left she will forget to re-mez, mob insta gibs 10% health cleric. You have started announcing when Mez is about to expire in important situations.

ADD CrushUGood - Ogre/Warrior - this fat ass mutha f'er is taking up half the room in unrest that you're camping. Cause Shillin is afk smoking and crush can't wait he's pulling giant packs of mobs just charging into random rooms. He's fat as all fuck and getting stuck in the hallways and doors. Cleric trying to heal this mofo through walls, lands a couple before the 8 mobs kill Crush and come for some more loving your way. If he's not getting stuck in hall or doorways he's getting ghoul rotted cause he's rocking the double adamantite bands with -10 MR a piece like a boss. You ask him to just let monk pull. He says fine, afk, comes back in 5 mins stoned as fuck and can't figure out which of the 5 mobs in camp to tank. You regret asking.

5th spot - vacant atm - was a great necro laying down some good undead mez's, had a charm pet going, but he nopped the fuck out. Replaced with a mage who did 5x the damage of Gary--who also nopped the fuck out. Next was a decent shaman who died every other pull trying to get 4-5 mostly unmez'd mobs slowed and finally went LD after the third CR.

You - dark elf cleric - trying to keep this group of special needs kids and adults alive for more than a full spawn, cause your day job sucks ass and you're mildly entertained that this is the first REAL challenge in your underachieving life since you banged that hot blonde chick six years ago on a good hair day. That, and you're also bored of thinking up new ways to prank your boss while having that douche bag Joey two cubicles down take the fall for it.
Reactions: isuldor, Falstaff, kinadin and 20 others

Oh, and I'll see you guys on the server Look for Aelzen. I always run Enchanter with a pocket cleric.

mtnhmr You know you can crush your balls in a vice without paying DBG to do it for you, right?
Click to expand...

EverQuest brought with it states of fear, hilarity, obscenity, and just right dumbfuckingshit.

Aelzen That is why I box all the important bits of a group. Just add DPS. Kick them if they're shitty.
Reactions: Aelzen and Flaw
F

Aelzen That is why I box all the important bits of a group. Just add DPS. Kick them if they're shitty.
Click to expand...

This is really the only way to go IMO
Reactions: Aelzen
F

There is a really impressive 12 boxer on agnarr. His main comp is a SK named Authority. Really nice guy, super helpful and relaxed.

I love to see him mowing shit down
Reactions: Foaming

RobXIII said:
Also looks like they fixed the fire pet, sorry to anyone who was going to roll mage because of it

- Fixed a bug that caused low level fire pets to cast an incorrect spell in eras prior to Planes of Power.
Click to expand...

I'm surprised it took them so long. I was gonna cheesball it with a mage/shaman but I think I'll stick with sk/shaman. I don't think I have it in me to do an enchanter again.
A

Flaw said:
There is a really impressive 12 boxer on agnarr. His main comp is a SK named Authority. Really nice guy, super helpful and relaxed.

I love to see him mowing shit down
Click to expand...

Authority is a really good boxer and cool guy. Probably the only big boxer that I actually respect his skill because to my knowledge he doesn't use any type of macroquestish programs.
Reactions: Flaw
Show hidden low quality content
You must log in or register to reply here.
Share:
Share