Brikker said:
So this thing is pretty nice? Hard to sit at my PC much these days with toddler family life. Would love to be able to handheld all my indie Steam games...
Click to expand...

Yes. The Steam Deck was made for you.
Reactions: Izo and Brikker

spronk said:
i posted a video about lutris above, it imports epic/uplay games directly into steamOS
dunno yet about gamepass, yeah xcloud works
join and browse daily the steam deck subreddit, people post shit loads of guides and "just bought a steam deck? heres what to do" shit. i learn stuff from it weekly

r/SteamDeck: Steam Deck is a handheld gaming system developed by Valve Corporation in cooperation with AMD. It brings the Steam games and features …

my honest advice is pick ONE SINGLE GAME you really wanna play and work on making it work. For me it was Simpsons Hit and Run, no reason at all I never played the game before no nostalgia but I love the Simpsons and it let me fuck around with Proton levels, installing stuff, using the Donut mod system, etc etc and it took 3-4 hours and now it runs beautifully. Played for 3-4 hours, was super happy, and now I'm gonna focus on how to make Ocarina of Time run beautifully under a nintendo emulator with mods and shit.

If you go the other way, "i'm gonna install EVERYTHING and play EVERYTHING!" you will just drown in information and get nothing done
Click to expand...

due to kids I have almost no time, and downloading stuff also takes ages ... but

I did install Lutris and installed AC Odyssey with UBI Connect, works find (just started it) ... and Hades also from EpicStore. Tried to play a bit Don't Starve from Steam but as not fully supported I struggled with the controls. (this is my biggest challenge right now, how to do something)

Is my assumption correct that Lutris or Heroic are just the frontend and the work later is done by Proton anyway ?
I guess installing the other Proton (the community updated one) and choosing depending on title which one to use makes sense, but when I run something in Lutris I can only choose the Proton version for Lutris and all games running in it or ?
Or is it in general better to run everything with the community proton ? (how you do it?)

I ordered a 512 GB SD card > here I would like to put EmuDeck as I missed alot of consoles in my youth, I basically had nothing until I was old enough to get me PS3

As a last try, I started Witcher 3 (steam fully supported) and now I am in love .... this is the game I want to focus on as I want to finally play it through from start to finish, originally I wanted to do it with the updated version on XBOX X but after all the mess I have my doubts when it will come out at all.
Reactions: Angerz

i should check out witcher 3 on my deck, i dont think the remastered edition is coming to PC since its already basically top end and i have a good save (finished the game but didnt do all the side quests or DLC)
Reactions: Blitz and Izo

I am thinking about this purchase. If I go there I ll go for the most expensive model. I m a member of the buy it once crowd,

i should check out witcher 3 on my deck, i dont think the remastered edition is coming to PC since its already basically top end and i have a good save (finished the game but didnt do all the side quests or DLC)
Click to expand...

Got the deckmate in. Briefly futzed with it. Trying to attach the kickstand to back of mount. (not yet on the deck, not sure it will actually jive with the jsaux rubber cover I got. I dont get how it pops in and stays in place, pops out easy. Maybe with the back of the deck to brace it? Dunno, the X tv mount style thing seems to stay in better.

How do mods work on this? I.e. witcher 3

exact same way as on pc, games get installed into steamapps\common\<gamename> on either local or microSD and you drop your mods into there. You can even run a prelauncher since some mods require that, but then you have to run it under Proton for win32 compatibility (or just boot your deck into windows 10/11 if you really want).

the easiest way is to set it all up on your desktop PC with mods, shortcut options, config it, make sure it loads and runs ok yadda yadda and then xfer the entire game directory to your steamdeck and reconfigure video options to 1280x720 and set rendering appropriately (max 60 fps etc). Or just configure it that way on PC so you don't even have to tweak anything. Most games do cloud saves and stuff.

I run Simpsons Hit & Run with the donut mod system which is a full blown exe that mods the game in memory and it works perfect as a prelauncher, just have to set the title and set the shortcut to run that exe instead of the game EXE, and point the mod system to the "right" directory. Withcer 3 works fine too, although all I've got is the fast travel, no inventory load, and nekkid Yennefer and Triss mods.
Reactions: Brikker

Simple question on the decks:

mare screen sizes too small for most steam games? I’m find the switch handheld best for only a few games and prefer when it is used as a console most of the time and used with an hd monitor or gaming monitor.

but I suppose you could do the same with the decks…

this dude is nuts

Looks like shit. Nice storage addition for all the games you won't be playing on this thing though.

Your finger landing on that 60°c chip by mistake when you're playing, sounds good.
Reactions: Blitz

i guess this is a gundam skin, people have posted in the thread how to buy it

if you have a 64gb steam deck you can swap it with this 1tb from microcenter ($110) pretty easy, tons of videos on youtube takes like 15 mins 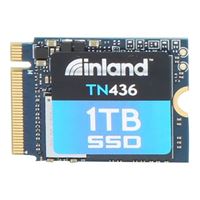 Get it now! Expand your ultrabook laptop or game console with a NVMe M.2 2230 SSD from Inland. With a fast, reliable Inland SSD, you will experience a quicker response time and a larger storage for all your applications and games. Designed for the new Gen4 x 4 PCIe slots, PCIe 4.0 and NVMe 1.

Well Sonic All Stars runs awesome. Gonna have to dig into Proton GE and the Heroic launcher so I can add Hades from Epic. Any new updated guides that people are using?

(also god damn this thing puts out a lot of heat)

Daezuel said:
Well Sonic All Stars runs awesome. Gonna have to dig into Proton GE and the Heroic launcher so I can add Hades from Epic. Any new updated guides that people are using?

(also god damn this thing puts out a lot of heat)
Click to expand...

Go into system, scroll to the bottom to advanced and turn off "Enable updated fan control." It will decrease the heat but increase the fan noise. The fan noise isnt really an issue while playing a game unless you are using headphones in a quiet room next to someone sleeping.
Reactions: Daezuel

512gb reservation has come back up. I think I'm going to cave and go ahead and get it. Gaming on the couch would be nice. Thoughts, prayers, advice?
Show hidden low quality content
You must log in or register to reply here.
Share:
Share