For Christmas Riot's CEO sent Hideo Kojima, who has been gushing about Arcane, one of those limited-run Vi/Powder statues. I'm not sure if they were available for general sale or just something you had to win via contest.


They seem a little older than they were in the first act but hot damn that's pretty dope. 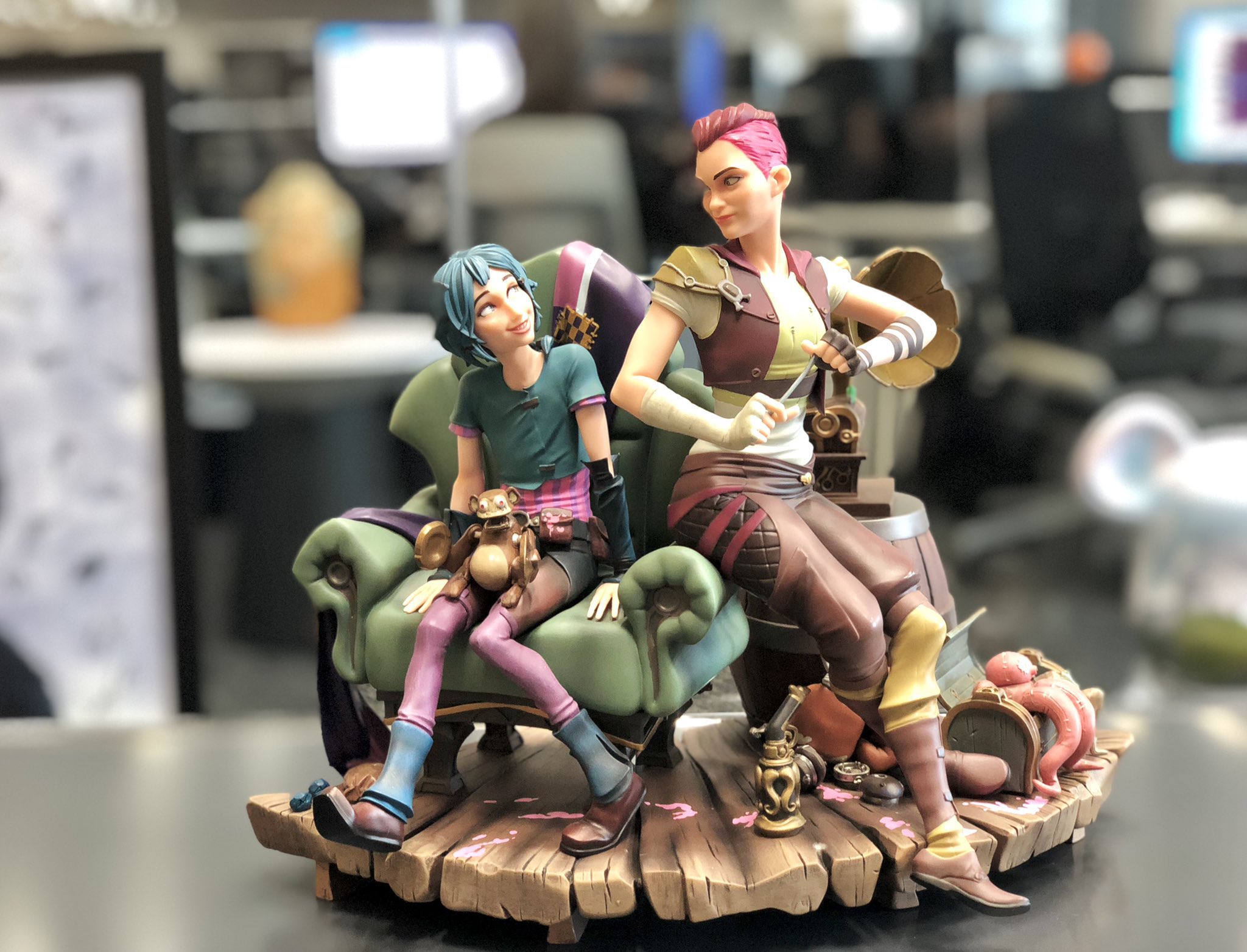 I put it on in the backround, didnt care but episode 3 with jinx/powder crying woke me up. I watched the series 2 times now and have no clue how this shit really works with the game
Reactions: phisey

Who gives a shit about the stupid game. This is god tier entertainment. Nothing else matters.
Reactions: Moglyzoke Moogleman, Seananigans, Hateyou and 5 others

Funny thing is the show's got fuck all to do with the actual LoL game other than having some of the characters in it. Nothing about the actual league, nothing about the summoner's rift, nothing about nexuses or minions or towers. That's probably for the best too. There's no way to contort MOBA gameplay into a narrative and not have it suck ass. It would've been worse than when they made that movie about Battleship the board game.

It's like how Alan Moore said that comics can do things that novels and films can't, and novels and films can do things that comics can't. I feel that's one of the things Riot got right in adapting their own product into a new medium that other videogame adaptations got wrong: they understood implicitly that games as a medium convey an entirely different experience than film. So, they just made a whole other product that told their game's story in a way that the new medium can do best.
Reactions: Burren and Captain Suave

Well dont be surprised if Henry Cavill is a character in season 2, someone asked him if he liked arcane and he hadnt heard of it. Well he watched it ater the interview and i guess has been gushing over the series
Reactions: phisey

People trying to make video game shows make sense within their game is probably what leads to so much garbage video game adaptions. Just making a good story using the world and characters is the way to go.
Reactions: Moglyzoke Moogleman, Seananigans, Captain Suave and 3 others

Homsar said:
Well dont be surprised if Henry Cavill is a character in season 2, someone asked him if he liked arcane and he hadnt heard of it. Well he watched it ater the interview and i guess has been gushing over the series
Click to expand...

He's cool and all, but I really hope S2 is far enough along that it's too late to cram him in as a cameo. From that podcast with the Fortiche Head of Animation, it sounds like there wasn't much of a pause for production after the end of S1 and the beginning of S2.

Maybe he could be Garen or something in S3 though.

Homsar said:
Isnt season 2 not even comming out until 2023?
Click to expand...

I believe so. I think I saw a tweet or announcement from somewhere else from them saying s2 would not be ready in 2022.

Probably not even then. The first season took 6 years, although they took a 2-3 year break from finishing the first act and starting the last 6 eps. Still about 3-4 years to produce the first season.

They've since opened two more offices and added more staff, but even then 2023 would be very optimistic.

Bit late to this party since I have never played lol and am not terribly fond of animations but due to the very positive word of mouth I checked this out yesterday. Then binged the whole season. Holy shit it is great! What wonderful TV.
Reactions: Moglyzoke Moogleman, Seananigans, Daidraco and 3 others

It's been two months and it's still 100% on Rotten Tomatoes with 97% user scores. Unreal.

Even Arcane's biggest simps like me figured some troll critic would've published some meh review by now.
Reactions: TJT

phisey said:
It's been two months and it's still 100% on Rotten Tomatoes with 97% user scores. Unreal.

Even Arcane's biggest simps like me figured some troll critic would've published some meh review by now.
Click to expand...

Critics are largely ignoring it, 2 critic scores on Dec 29th, none since then, and none prior since Dec 3rd
Audience is mainly watching this from word of mouth now, so most will likely enjoy it.
If Arcane was a featured show by Netflix, you would see a lot more trolls imo.

Same goes for Rick and Morty the first season or 2 since I was such an uknown
Reactions: phisey

True enough. Even Breaking Bad took a few seasons to find its legs on Netflix. But when it did, it lifted the whole show even on its parent network.

This show is now my gold standard for what animated shows should be. I've never seen an animated show capture emotion so well, allowing me to be invested in characters and care about the story as if it were live action. They knocked this shit out of the park imo.

Bonus points because the SJW woke shit isn't overt like everything else nowadays. At least not that I noticed.
Reactions: Moglyzoke Moogleman, Adebisi, velk and 1 other person

This reminds me when as a teen the first time I saw Akira and was blown away when you are used only to Walt Disney. Really impressive work and I like there is not really this Light vs Evil theme, it's like it is > complicated
Reactions: phisey

Yeah I felt the only comparison was to Akira and Ghost in the Shell as that sort of watershed moment in animation. I feel it goes beyond both of those because of its script and characters, though. Not to diminish Akira or GiTS but there's they were both adapted from mangas that ran for years and were condensed down into two-hour movies, there was bound to be some signal loss in those adaptations.

Arcane could've hosed down all nine episodes with filler exposition if their sole intent was to sell the game and the characters, but the Riot chose to pare down the script to tell the best story they can instead, which produced a better show that also serves as a better introduction to the game in the long run.

I feel that too on some level. But I wonder what parts of this will get homaged? does any of it really stand out as iconic in the same way as the motorcycles, or destruction of Tokyo?
Reactions: phisey
Show hidden low quality content
You must log in or register to reply here.
Share:
Share