You didn't pick out that Asian on the far right, she's probably the best looking one tho.
Reactions: DickTrickle 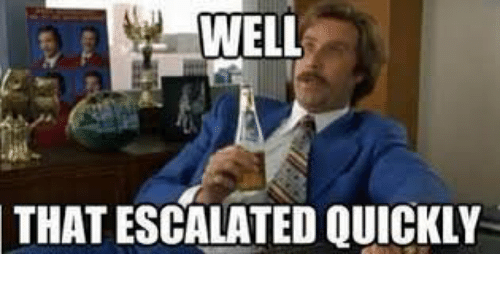 If they laid off 225 people, what does that picture of about 40 represent anyway? Is it just the amount that came to the "no boys allowed club"... Sorry Women+ gathering?

Valishar said:
If they laid off 225 people, what does that picture of about 40 represent anyway? Is it just the amount that came to the "no boys allowed club"... Sorry Women+ gathering?
Click to expand...

I'm guessing that is the "narrative team". All the coders are inside actually working.
Reactions: dizzie, ZyyzYzzy, Daezuel and 1 other person

Soygen said:
I'm guessing that is the "narrative team". All the coders are inside actually working.
Click to expand...

do those bitches even look like they know how to write? they truly look like HR and diversity enforcement.

From what I've played of these games, the bar is pretty low.
F

The Walking Dead: The Final Season Pulled From Sale at Telltale's Request - IGN


THE WALKING DEAD: THE FINAL SEASON PULLED FROM SALE AT TELLTALE'S REQUEST.


THE WALKING DEAD: THE FINAL SEASON PULLED FROM SALE AT TELLTALE'S REQUEST.
Click to expand...

just go and tweet that this is b/c of the lawsuit, hopefully that employee gets deathtreats and cuts vertically
Reactions: DickTrickle and Dom

March 2017:
Telltale CEO and founder Kevin Bruner announces he is leaving the company. It is later reported that Bruner was forced out as he clashed with the company's board of directors. Telltale's other co-founder, Dan Connors, takes over as CEO.

September 2017:
Telltale hires former Zynga executive Pete Hawley to become the company's next CEO. Before Zynga, Hawley was a production lead at Fable studio Lionhead, working alongside Peter Molyneux on that series from 1993 to 2003. He then spent time with Sony (2003-2005), then EA (2005 to 2010).

November 2017:
One of Hawley's first major moves as CEO of Telltale is enacting a huge round of layoffs in which the company cut 25 percent of its workforce, which amounted to around 90 people at the time. The layoffs impacted "all divisions" at Telltale, and were part of Telltale's ambition to become "more competitive as a developer and publisher"

December 2017:
Telltale's CEO Pete Hawley talks to GamesBeat about the layoffs and the future of Telltale. He rejects the idea that Telltale is in trouble, stating he feels the company is in "really good shape." The layoffs were necessarily to help Telltale succeed in the future, Hawley said at the time.

March 2018:
A deeply sourced report from The Verge alleges that Telltale operates under a culture of heavy, expected crunch pushed by toxic management. Among the many shocking claims in the report is that employees worked as many as 18 hours per day for weeks on end.

September 20, 2018:
According to Variety, Telltale management informs employees that its negotiations with media giant AMC for more funding were "going well," with the company expected to complete the funding process in the coming weeks. There was also reportedly a deal being negotiated with South Korean mobile game giant Smilegate for more funding.

Smilegate and AMC both apparently leave negotiations with Telltale on Thursday, just hours before an eventful Friday. The reports offered no explanation for why AMC and Smilegate left negotiations on the same day. Variety previously reported that movie studio Lionsgate also decided to pull out of a financial deal with Telltale.

September 21, 2018:
According to reports, Telltale Games holds a meeting where it informs more than 200 developers that they were losing their jobs right then and there. According to Variety, employees were given paper paychecks for pay through the end of the day. They reportedly were instructed to leave the building within 30 minutes (employees were allowed back in for a period of three hours on the following Monday to collect personal belongings). The affected staffers received no severance pay, and their health care cover reportedly only extended to the end of the month. Management told employees they should consider applying for unemployment benefits.

Former Telltale CEO Kevin Bruner writes a blog post on his personal website talking about how he clashed with Telltale's board of directors about the future of the company. He shares no more information about what he and the board disagreed over. Telltale's board of directors includes Lionsgate CEO Jon Feltheimer, former Electronic Arts CEO John Riccitiello, and others.

Telltale's official statement explains that the company is undergoing a "majority studio closure," with only around 25 people remaining on board to "fulfill the company's obligations to its board and partners." CEO Pete Hawley, who joined Telltale in September 2017, says it was an "incredibly difficult year" filled with "insurmountable challenges" for Telltale. He says he is proud of Telltale's efforts, but at the end of the day, its efforts "did not translate to sales."

Dan Connors, Telltale's co-founder, tells Variety that Telltale had "no choice but to stop production" after it failed to close another round of financing to keep the company afloat. "Sadly, everyone was so focused on doing what was required to keep the company going that when the last potential partner backed out, there were no other options," he said.

September 24, 2018:
One former Telltale employee, Vernie Roberts Jr., files a class-action lawsuit against Telltale for unpaid wages and benefits that he claims Telltale owes him and other affected staffers. Roberts Jr. claims Telltale violated California's WARN Act, which states that an employer must provide 60 days written notice about a mass layoff. There are some exceptions to the federal WARN Act. Attorney Richard Hoeg, who is not working on the case, tells GameDaily that Telltale may be able to deem the situation an "unforeseeable business circumstance" to remain in compliance with the WARN Act. However, California a version of the WARN Act unique to the state that does not include the "unforeseeable business circumstance" clause.

Telltale Games announces that "multiple potential partners" expressed some level of interest in helping Telltale to complete and release The Walking Dead: The Final Season. The company shared no information about who these potential partners might be. Additionally, Telltale says it can make no promises about ever releasing Episodes Three and Four. Even if they are released, Telltale warns fans that they might only come out "in some form."

Also on September 24, Netflix announced that it is evaluating its options to continue production on Telltale's Stranger Things game with a different partner. The streaming giant also confirmed that it plans to go ahead with releasing Minecraft: Story Mode on Netflix as planned.

September 25, 2018:
The Walking Dead: The Final Season's second episode launches as planned, but it's not the only major development this day. The game's $20 season pass, which provides access to episodes 1-4, was removed from sale on all major digital storefronts including PS4, Xbox One, and PC. A statement from Telltale says the company is pausing sales until further notice.

TLDR what is this, a Telltale Game?
Reactions: DrSpooge and Dom

pharmakos said:
You didn't pick out that Asian on the far right, she's probably the best looking one tho.
Click to expand...

Damn you're right. Missed her completely.
Reactions: pharmakos and ZyyzYzzy

Soygen said:
From what I've played of these games, the bar is pretty low.
Click to expand... 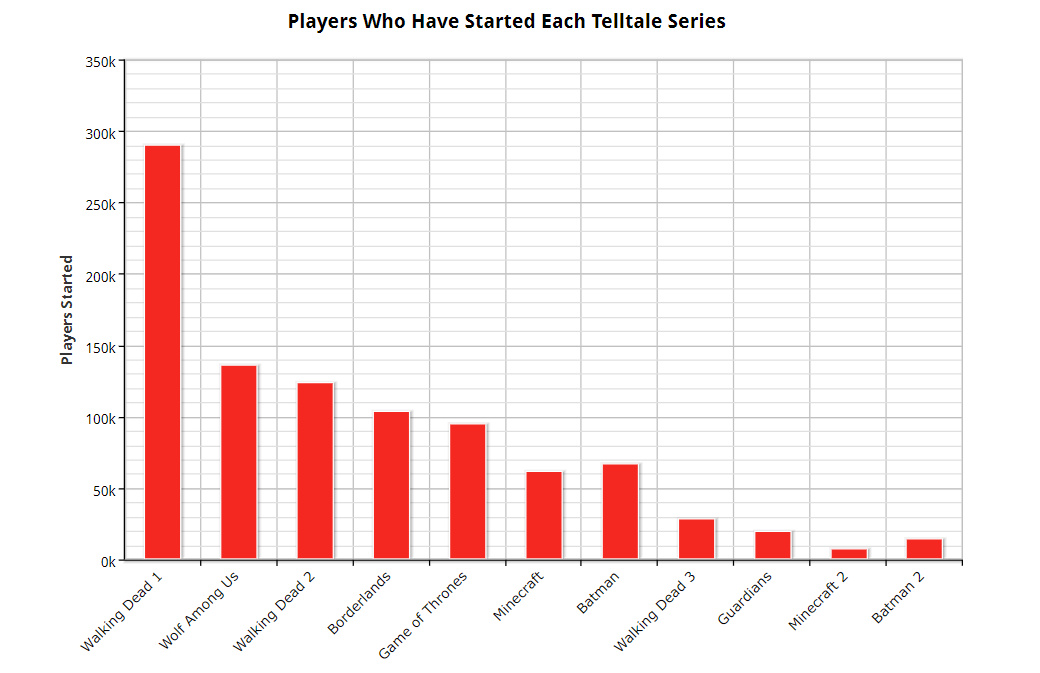 Analysis: Beyond The Walking Dead, No One Has Been Playing Telltale Games

Here's a breakdown of player numbers across our community members here and on TrueAchievements.
Click to expand...

I'll be honest, I can't believe how big that studio was. That size studio is usually pushing out major full priced titles that sell millions of copies across all platforms.

At their peak (~350) the burn rate must have been nearly 4 million USD a month, supported by games that are niche and have low margins. Considering the type of games they made likely have a business cycle similar to movies, this was the obvious end result.

The people running the company's strategy clearly had no idea what they were doing and assumed a bit of success meant they could ride that gravy train forever. While all of their SJWness likely didn't help the company, I don't think it would have mattered either way considering how badly things seem to have been run.
Reactions: Chanur, DrSpooge and AngryGerbil

The sales would probably have been good enough if they had the right amount of people working on each of these games. Which would be less than 10 per project probably, with some overlap between concurent projects for some position. The games really didn't need 50people to work on them for what they were putting out, and you can't expect this kind of game to sell millions. So yeah that looked fucking terrible. The worst part is when you hear the story about overworking and shit. How does a studio with 350people working on glorified visual novels have people overworking? You'd think they'd have issues with not having enough shit to do instead and making up bullshit positions and what not. Which probably did happen, but I don't know it looks like a really really poorly managed situation.

350 people is a shitload for what they did. They were blowing through enough money a month to keep a crack stash at pantheon full all the time, pretty impressive.
Reactions: AngryGerbil

SJW had jackshit to do with their failure. I never got a "SJW" vibe from any of their games. So many of you look for fucking ghosts in every shadow, I fucking swear. The problem was multi-fold, IMO:

1) Same game model: Even with new IP, all their games felt the same. WD1 did well because point n' click adventure games had been mostly extinct since the 90s and the branching story elements gave it a slight amount of replayability. Once the novelty wore off and the branching story elements became strongly constrained in sequels, people began to tire of it and sales faltered. They didn't evolve/innovate and really just coasted on WD1's success and hoped that would replicate.

2) Streamers/Youtube are absolute murder to linear story games like this: Especially streamers that put choices up to a vote. The audience/viewer gets to experience the game. Unlike action games, you really aren't missing all that much in a story/adventure game like this if you aren't actually playing yourself. You watch a play through, watch the interesting side choices, and voila...you have 0 reason to play the game now

3) Players became savy to the retail model and would just wait for sales to "binge": The episodic model, while I understand the reasoning (ie, we can ship the game earlier and work on the rest of the content later!!!), is kind of an anachronism in today's "Binge watch" era. Additionally, consumers began to notice a trend of sales that happened after ALL the episodes were available. This reduced over all profits, because you had fewer people buying at full price and helping fund those later episodes and more people waiting for Steam Summer Sales or whatever to snag the full product.

4) IP Money Anchors: I have to imagine that unless their IP model consisted of "let us use your IP and we'll give you 50% of the profits!!" or whatever, they probably had to pony up some money to acquire many of these IP, plus any VA's associated with the IP. Combine that with lackluster sales and the mass IP grab they had as of late vs. original stories probably began to heavily weigh them down.
Reactions: cabbitcabbit, McShrimp, Quineloe and 3 others
Show hidden low quality content
You must log in or register to reply here.
Share:
Share