What did you just read?

Royalroad is by far the best workday distraction site out there.

The Girl from the Mountain | Royal Road started this one too. Pretty weird mix of Tom Clancy level military detail and Lovecraftian, dystopian, whatever.
Reactions: velk

Comes out on Kindle October 2nd. The new cover is absolutely... appropriate. 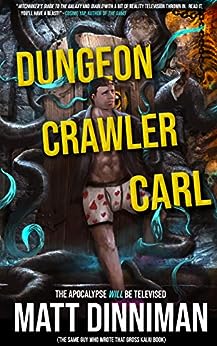 Royalroad is by far the best workday distraction site out there.
Click to expand...

A bit too much, at times.
Reactions: TJT

The cat in the series is just perfect.

Ukerric said:
For funsies, Sir Nigel Loring and Sam Aylward are major characters in the Emberverse series by S. M. Stirling. Pretty much the entire cast is there (John Hordle, Alleyne, ...)
Click to expand...

In a post-apocalyptic story? Seems odd.

Stirling said it was an homage to the original.
V

Royalroad is by far the best workday distraction site out there.
Click to expand...

I have that on my list, but haven't started yet. Good to see a recommendation. Royalroad is good value yeah. Saved me a lot of money on books so far, even with me donating to a few patreons.

Let's see - what have I looked at recently.

Books
----------
Dispel Illusion ( Impossible Times 3 ) - Mark Lawrence
Basically the other side of the story to how the events in book 1 turned out. If you have read the first two you know pretty much what to expect from this one. Overall I liked it, and it was a satisfying conclusion to the series, but I felt it suffered a bit to YA sensibilities in how conveniently everything was wrapped up - to me it cheapened some of the events in the earlier books.

Network Effect - Martha Wells
The first full length novel about the adventures of self-titled Murderbot. I wouldn't read this without having read the novellas first, which I would highly recommend because they are great. This book managed to maintain that high standard - after a mostly routine ( by Murderbot standards anyway ) survey mission, their ship is attacked and disabled by a suspiciously familiar transport vessel, and some of the expedition crew are kidnapped, including Murderbot and Dr Mensah's teenage daughter.

I really like this one, and will pick up any further books as they come out. Murderbot is kind of a unique character, and seeing it from Amena's point of view was amusing as she is blissfully unaware of how literal Murderbot is.

Street Cultivation (1 & 2 )- Sarah Lin
This is probably technically litrpg, but it's quite unlike any other series I've looked at. The setting is unusual - imagine a world like in more traditional cultivation stories, but where it's undergone centuries of industrialisation and commercialism. The main character works a 'gym' where powerful people pay to beat up the employees, because you can advance abilities faster with real opponents. Life is shit if you are poor, even if you have magic powers.

The story is more Rocky than Cradle - I quite liked it. Will keep an eye on the author.

Web Serials
-------------------
The Gods are Bastards
This is labelled as a fantasy western, which is kind of true I guess, but put me off initially. The setting is actually more like a DND campaign that's advanced enough to be similar to the western expansion period in the US. Wands, not guns, things of that nature. It's actually difficult to summarise what it is about, as it follows so many characters. This is probably it's biggest weakness actually, the story is unfocused enough from being split all over the place it doesn't really have the draw that pulls me into reading the next chapter etc ( which is probably about someone else anyway ). It's still pretty good, but I read a bit here and there rather than focusing on it.

Vainqueur the Dragon
Parody of a litrpg - the isekai hero gets caught trying to steal from a dragon's lair and is offered a job as the dragon's minion, which comes with awesome benefits, like not immediately being burned to death or eaten ( unless the dragon is really hungry ). The dragon Vainqueuer is immensely strong, arrogant, vain and dumber than a box of rocks. He is, however, fascinated at the idea of quests, which is apparently where people actually pay you to kill things. He decides that he is going to become an adventurer.

This is pretty funny, although it's played mostly straight, with the humor coming from the absurd situations more than straight up jokes ( more like Galaxy Quest type parody ). I'm about 2/3 through and like it so far. Some clumsiness in the writing/editing.

Blessed Time
Litrpg about kid who gets a mythic ability to rewind time 5 years as his special power. The author may have been *cough* slightly influenced by Mother of Learning. It's well written and entertaining though, and has kept me interested enough in seeing where it goes to put it on the current rotation.

The character sheet is, however, an abomination. The author needs to kill that thing with fire asap ;p

Forge of Destiny
Cultivation series - street kid in fantasy china is identified as a potential cultivator and is sent to an elite training academy to prepare her for a mandatory army commission. Sort of Cradle meets Harry Potter type vibe, with the setting being medieval fantasy China. I like this one a lot, and put it into the regular rotation.

The Zombie Knight Saga
Teenage suicide gets brought back as effectively a zombie to do the bidding of a grim reaper that wants more ability to affect the human world. Interesting world building and story, but the main character is a depressing wet blanket that makes the worst anime protagonists look good. Only partway into this one, it's possible it gets better later on, but I've put it back on backlog for now.


Super Minion
Biomechanical shapeshifting lab experiment develops sentience and escapes the lab after encountering a suspiciously convenient piece of malware. Loose in a city overrun with super heroes and super villains, a series of coincidences end up with it getting a job as a low-level minion for one of the cities more infamous super-villains.

This was fun and entertaining, a bit reminiscent of Everyone Loves Large Chests, but without the perverted sex stuff. Well written and edited, the only downside is that the author has managed 40 some chapters over 3 years.


There is no Epic Loot here, only puns
This was a pleasant surprise. A dungeon core series where the main character is a dungeon, although takes an unexpected left turn when she decides that she is definitely not down with this whole killing people to steal their mana thing. The story has a kind of whimsical charm, and can be quite funny, with stuff like various adventurer's reactions to the giant Myconoid Warrior trying to sell them his absolutely terrible handmade pots.
The dungeon is growing next to a village which is basically a retirement home for legendary adventurers, which leads to a cast of pretty unique characters as well as a lot of wacky craziness.

Overall really like this one, quickly catching up to current time.
Reactions: Ukerric

Damn, was wondering how much some of these guys made that do the web novels, and shirtaloon (the guy who writes he who fights with monsters) has his patreon show how much he has pledged, and right now it’s sitting at $15,558 per month
Reactions: Ukerric
V

Ritley said:
Damn, was wondering how much some of these guys made that do the web novels, and shirtaloon (the guy who writes he who fights with monsters) has his patreon show how much he has pledged, and right now it’s sitting at $15,558 per month
Click to expand...

Yeah, Pirateaba is more than that now I think too ( numbers no longer public, but patrons are up significantly ). Even $1 a person adds up to quite a lot if you have thousands of readers, and $1/month is dirt cheap for the amount of entertainment you get.

Still, it's like most stuff I think, where the top 10 make more than the bottom 10,000 combined.
Reactions: TJT and Ukerric

He Who Fights with Monsters is one of the much better-written ones. I absolutely love the direction it's going right now. He's all but abandoned the LitRPG elements too. It's just a great fantasy adventure full of Australian Snark now.

I've never donated to any of them. I do buy books on kindle for dudes like Wiz who went full draconian with it though and I did get RR premium for $3 a month!
Reactions: Ukerric

TJT said:
He Who Fights with Monsters is one of the much better-written ones. I absolutely love the direction it's going right now. He's all but abandoned the LitRPG elements too. It's just a great fantasy adventure full of Australian Snark now.
Click to expand...

Bumped that one up on the queue and read the first few chapters today. Good recommendation.

"You aren't wearing pants either you know."

"Neither am I wearing a cape that makes me look like I got a participation prize in the local special needs comic con, Carl."

Reread Renegade: (The Spiral Wars Book 1) and enjoyed it much more this time.

Love the ship details like which parts become floor and wall when under accel or with the crew cylinder spinning, or at dock.

Was an interesting take on elite soldiers adapting to new roles. When they are used to full-on war for years and now they need to bodyguard / investigate / police.

And the marine major is a super interesting character.
Reactions: velk

Should I read Malazan, Black Company, or Sanderson book next. I never finished those 3.

Regime said:
Should I read Malazan, Black Company, or Sanderson book next. I never finished those 3.
Click to expand...

Sanderson's my personal favorite author nowadays, so I'll give my nod to him.

Malazan's big and sprawling and convoluted, so I feel like you do need to read those books in relatively quick succession, which makes them something of a time commitment. Worth keeping in mind.

Black Company's good, although I personally don't rate it as highly as the other two.
Show hidden low quality content
You must log in or register to reply here.