Arbitrary said:
Woman director directs episode where show's female leads complain about being marginalized by men. The characters are thus marginalized within the story to make that theme fit.
Click to expand...

Breakdown said:
Rick and Morty at 10 percent is better than every other shit woke hack shit that is on every other channel right now.
Click to expand...

Homsar said:
I would post a scene that gets you right in the feels but i dont want to ruin it for someone that hasnt stumbled upon final space
Click to expand...

Reminds me of
Also last Ricky and Morty wasn't that bad.

Finally got around to rolands show polar opposites and its pretty good. I really liked s02 Ep 6, one where its ripping off The Lake house with keanu
Reactions: Hatorade

I talked to the Rick and Morty artist. We actually hung out with the same group for the after party. We all followed each other around to 3 places and closed down 2 bars. I left him alone at the bars with the fanboy shit because he looked like he was trying to pick up girls. But he was pretty cool. People were coming up to him all night and he was doing pictures and drawing R&M on napkins and body parts and shit. I was disappointed he didn't draw on any titties, but hey, you can't win them all. At one point some rando told him that he loved Rick and Morty, but after season 3 it went to shit. His response was that S4 was a buildup to S5.

Anyway, the next day I asked him why the seasons take so long. He said it was mostly because of the animation schedule. All of the animators work for Adult Swim (he works for Rick and Morty, not adult swim) and they have a lot of shows to animate. So things get bumped around on the schedule all the time. He did mention there was a new contract that should fix that.

I also asked him how much Harmon and Roiland are involved in the show. He said they're heavily involved. They dream up the ideas and the rest of the team has to make them legal to show on TV.
Reactions: Dandai, Xarpolis and Arbitrary

What the fuck did I just watch?

I mean, this is classic Harmon. Nearly all of his shows drop off after 3 seasons. He just seems to get bored with characters after that and puts shit on auto pilot.

I thought the first episode and the clone episode were pretty strong. The rest were kind of weak. If this is all a build up to a big reveal that we're watching evil Morty's origin and not Rick C-137, it might be decent. But even that's saying something that the whole season hinges on a twist.
Reactions: Rime

Homsar said:
I find this so hard to like, i finally watched rollands show on hulu and it has a massive fluid crazyness that has been gone from r&m. I will just say if you want fluid writing i was super happy to rewatch episodes because rolanand went meta or whatever
Click to expand...

they should have focused way more on wrapping up evil morty/rick c137 since season 3. but as with most shows, it ends up milking a cashcow until it dies, and then continue trying to milk it.
Reactions: OU Ariakas and Rime

reavor said:
they should have focused way more on wrapping up evil morty/rick c137 since season 3. but as with most shows, it ends up milking a cashcow until it dies, and then continue trying to milk it.
Click to expand...

I dont know wtf happened with roland or harmon. I do know roland was crazy and able too make a full eppisode drunk like it was nothing
Last edited: Today at 2:18 AM

OU Ariakas said:
What the fuck did I just watch?
Click to expand...

I guess this kind mad libs bullshit is just what we're doing this season.
Reactions: Seananigans and OU Ariakas

Homsar why are you deleting your posts? 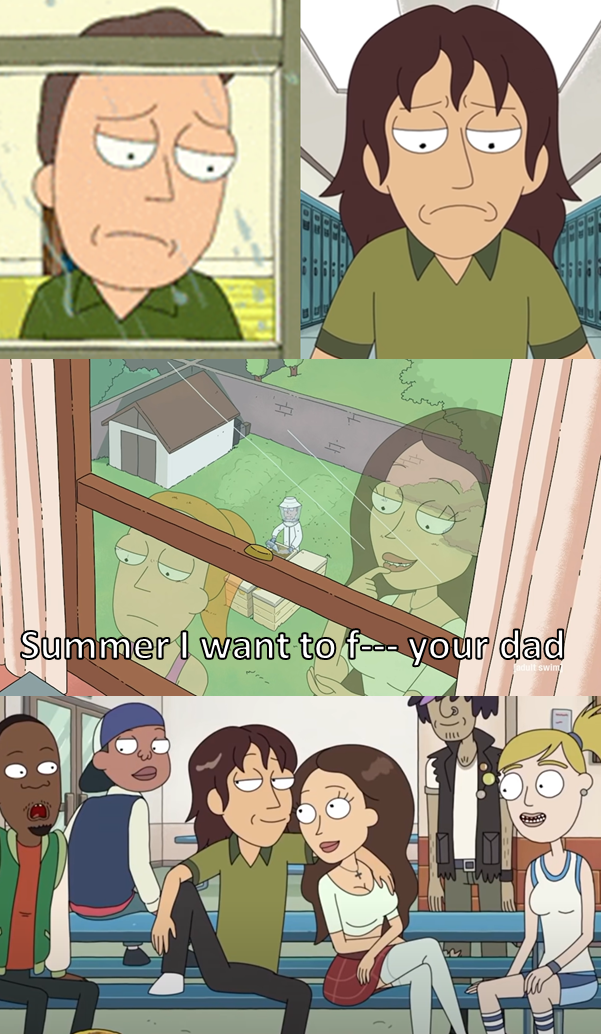